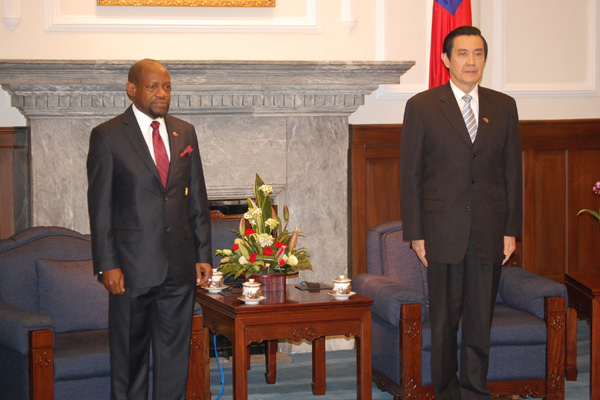 “Taiwan has a great deal to offer the international community in a vast number of areas. Its prolonged exclusion from various United Nations agencies, therefore, serves neither the interests of Taiwan nor those of the global community,” Prime Minister Douglas told the 68th Session of the United Nations General Assembly.

He told the world body that 30 years ago, St. Kitts and Nevis established diplomatic relations with several countries including the Republic of China on Taiwan and that in the intervening years, this relationship has been mutually beneficial.

“As the debate on sustainable development unfolds, St. Kitts and Nevis is eminently qualified to speak on the myriad contributions that the Republic of China (Taiwan) is capable of making to the international community. While the international community is preoccupied with ensuring peace and security globally, we can applaud the Government of the Republic of China (Taiwan) for promoting peace across the Taiwan Strait, and proposing the East China Sea Peace initiative, thus demonstrating a commitment to peace and stability,” said Dr. Douglas.

He pointed out that Taiwan is one of the top eighteen economies globally and has worked assiduously to advance the economic interests of countries such as St. Kitts and Nevis.

“In this regard, we have collaborated on a large number of key projects such as the multi-sectoral Agro-Tourism Development Farm, our high-priority solar energy farm, and an ICT Centre, all designed to advance the social and economic interests of my nation,” said the St. Kitts and Nevis Prime Minister who placed on the record his delegation’s appreciation to the World Health Organization (WHO) for inviting Taiwan, for five consecutive years, to attend the World Health Assembly as an Observer.

“We are of the view that Taiwan has adopted a very pragmatic approach to its meaningful participation in United Nation Specialized Agencies and functional organizations that are critical to the current global efforts to address many issues of mutual concern. My delegation is convinced that the arrangements made for Taiwan’s presence in the World Health Assembly, which have been referred to as the “WHA Model” serve as a useful point of reference for Taiwan’s meaningful participation in other international agencies such as the International Civil Aviation Organization (ICAO), and the United Nations Framework Convention on Climate Change (UNFCCC). While on that note, permit me, Mr. President, to commend Mr. Roberto Kobeh Gonzalez, President of the ICAO Council, for the decision to invite Taiwan to attend this month’s 38th ICAO Assembly as a Special Guest,” said Prime Minister Douglas.