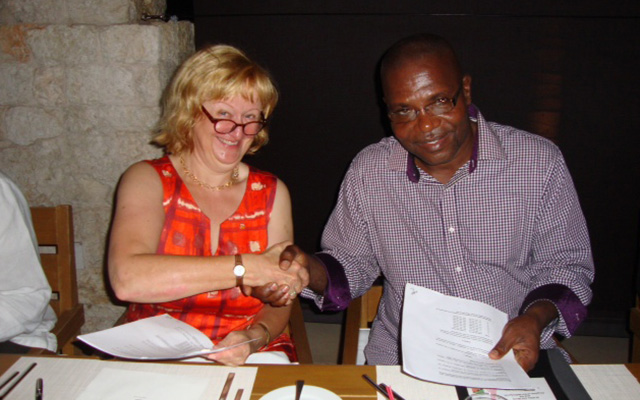 Basseterre, St. Kitts (CUOPM) – Agreement has been reached on a maritime boundary between St. Kitts and the Dutch island of St. Eustatius, but talks with France in relation to St. Barts to continue.

He said that the process was facilitated through diplomatic exchanges between the parties over the past four years.

Speaking prior to the start of the final round of negotiations, St. Kitts and Nevis’ Prime Minister the Rt. Hon. Dr. Denzil L. Douglas said reaching an agreement is a matter that is of such great social, political, and economic significance.

“Increased and increasing globalization, intense global competition for resources across borders, and the responsibility of all governments to protect the interest of their respective nations while forging strong working relations with neighbours, make today’s negotiations important indeed,” he said.

Pointing to the closure of the sugar industry nearly a decade ago, Prime Minister Douglas noted that in order to ensure a smooth transition to a non-sugar economy, the meticulous identification of the country’s various resources and the role they would play in the new economy therefore assumed special significance.

“And the maritime resources of our Federation are key parts of that resource matrix which my Government has so painstakingly developed, and which it is our responsibility to ably and responsibly manage,” said Dr. Douglas.

“Every state in this region needs to be able to manage its respective marine space and marine resources. And so the current jurisdictional uncertainty which exists amongst the various states must be addressed without delay. Our respective maritime law enforcement and security responsibilities – pertaining to drug trafficking, unregulated fishing, human trafficking, and the development of our economic interests – demand it,” said Prime Minister Douglas.

“Each of us recognizes the importance of developing and capitalizing on the maritime space which, under international law, falls within our respective jurisdictions. And we are all keenly aware of the imperative to safeguard our territorial integrity. The relationship between St. Kitts and Nevis and St. Eustatius is one of long-standing. Our geographical proximity offers a multiplicity of opportunities for cooperation and collaboration today – just as it has in the past,” said Dr. Douglas.

Mr. Hobson said that in October 2013, the two parties met for technical discussions at the Commonwealth Secretariat in London and agreed on the coordinates from which the boundary would be drawn. Using these coordinates, both teams agreed on the base points to construct a median line between both islands and following proposals and counter proposals from both teams, common grounds was reached on a number of issues.

He disclosed that the agreement will enter into force once internal constitutional procedures in the Netherlands are completed and will facilitate the exercise of rights by St. Kitts and Nevis and St. Eustatius in their respective territorial seas, and greater cooperation within their exclusive economic zones.

“Our team is highly elated to have reached agreement on the maritime boundary between the two States. This matter was on the table since the early eighties and after 4 years of preparation and training in collaboration with the Commonwealth Secretariat, the people of St. Kitts and Nevis can now easily locate the maritime boundary between St. Kitts and St. Eustatius. This boundary will be placed on the nautical charts for this area in the near future for the benefit of all including fishers and other mariners,” said Hobson.