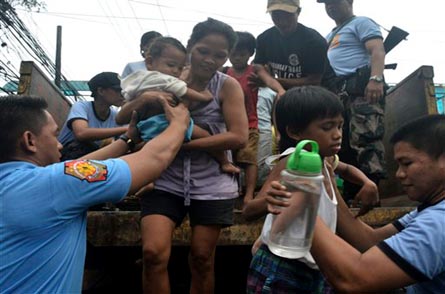 Manila, Philippines (AP) — One of the most powerful typhoons ever recorded slammed into the Philippines on Friday, setting off landslides, knocking out power in one entire province and cutting communications in the country’s central region of island provinces. Two people had died.

Telephone lines appeared down as it was difficult to get through to the landfall site 650 kilometres (405 miles) southeast of Manila where Typhoon Haiyan slammed into the southern tip of Samar island before barreling on to Leyte Island.

A villager was electrocuted in southern Surigao del Sur province and another was hit by tree felled by strong winds in central Cebu province, officials said.

Television images from Tacloban city on Leyte Island showed a street under knee-deep floodwater carrying debris that had been blown down by the fierce winds. Tin roofing sheets ripped from buildings were flying above the street.

Visibility was so poor that only the silhouette of a local reporter could be seen through the driving rain.

Weather officials said that Haiyan had sustained winds at 235 kilometres (147 miles) per hour.

More than 125,000 people had been evacuated from towns and villages in the typhoon’s path, which was to cut across the central Philippines, the National Disaster Risk Reduction and Management Council said. Among them were thousands of residents of Bohol who had been camped in tents and other makeshift shelters after a magnitude 7.2 earthquake hit the island last month.

Southern Leyte Gov Roger Mercado said 31,000 people were evacuated in his landslide-prone mountainous province before the super typhoon struck, knocking out power, setting off small landslides that blocked roads in rural areas, uprooting trees and ripping roofs off houses around his residence.

The dense clouds and heavy rains made the day seem almost as dark as night, he said.

“When you’re faced with such a scenario, you can only pray, and pray and pray,” Mercado told The Associated Press by telephone, adding that his town mayors have not called in to report any major damage.

“I hope that means they were spared and not the other way around,” he said. “My worst fear is there will be many massive loss of lives and property.”

The typhoon — the 24th serious storm to hit the Philippines this year — is forecast to barrel through the Philippines’ central region Friday and Saturday before blowing toward the South China Sea over the weekend, heading toward Vietnam.

Jeff Masters, a former hurricane meteorologist who is meteorology director at the private firm Weather Underground, said the storm had been poised to be the strongest tropical cyclone ever recorded at landfall. He warned of “catastrophic damage.”

But he said the Philippines might get a small break because the storm is so fast moving that flooding from heavy rains — usually the cause of most deaths from typhoons in the Philippines — may not be as bad.

Weather forecaster Gener Quitlong said the typhoon was not losing much of its strength because there is no large land mass to slow it down since the region is comprised of islands with no tall mountains.

Officials in Cebu province have shut down electric service to the northern part of the province to avoid electrocutions in case power pylons are toppled, said assistant regional civil defense chief Flor Gaviola.