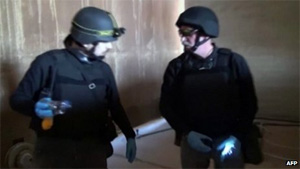 (BBC) Chemical weapons inspectors in Syria have been unable to access one of the designated sites because of safety concerns, the world’s chemical weapons watchdog has told the BBC.

It is the first time they have been unable to complete a scheduled visit, the Organisation for the Prohibition of Chemical Weapons (OPCW) spokesman said.

But overall the experts were pleased with their progress so far, he said.

Their mission to rid Syria of chemical weapons was set up by a UN resolution.

It followed international outrage at a chemical weapons attack near the Syrian capital Damascus in August.