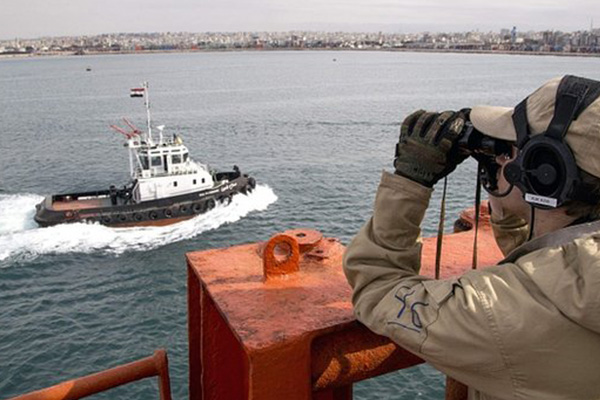 (BBC) — Syria says international accusations that it is delaying the destruction of its chemical weapons stockpile are “absolutely unjustified”.

Deputy Foreign Minister Faisal al-Mekdad told the BBC “Syria is doing its best” to comply with the timetable to destroy its chemical weapons.

Syria missed Wednesday’s deadline to hand over its entire stockpile.

Mr Mekdad said a shipment of weapons came under attack twice on its way from Damascus to the port of Latakia.

“We shipped two shipments to the Syrian coast,” he said. “The second shipment was intercepted by fire from terrorist groups.”

He added: “This is a serious business. Syria is in war, and the Americans and others have to take this into consideration.”

He described as “absolutely unacceptable” US Secretary of State John Kerry’s recent condemnation of the government’s use of barrel bombs in the city of Aleppo.

Activists say more than 150 people have been killed after barrels containing explosives and metal fragments were dropped by military helicopters – prompting an exodus from rebel-held parts of the city.

“We are defending our people against terrorist attacks. We have never bombarded places with civilians,” Mr Mekdad said, accusing the US of “still supporting terrorist elements” in the country.

The Syrian government refers to rebel forces as “terrorists”.

Syria has about 1,300 tonnes of declared chemical weapons.

The US said last week that so far only about 4% of the stockpile – 30 tonnes – had left the country.

US Defence Secretary Chuck Hagel said he was “concerned” that the UN-backed plan was falling behind schedule and said Damascus “had to take responsibility for fulfilling its commitment”.

Russia – a key ally of Syria – has said Damascus should complete the transfer of its chemical weapons to the coast for removal by ship by 1 March.

A deadline was set last year for all the weapons to be destroyed by the end of June.

The Organisation for the Prohibition of Chemical Weapons (OPCW), which is overseeing the destruction operation, has admitted the process has been slowed down by security concerns.

Mr Mekdad stressed: “Syria is committed to all its agreements, with the OPCW and the UN Security Council. We shall implement on time all our obligations.”