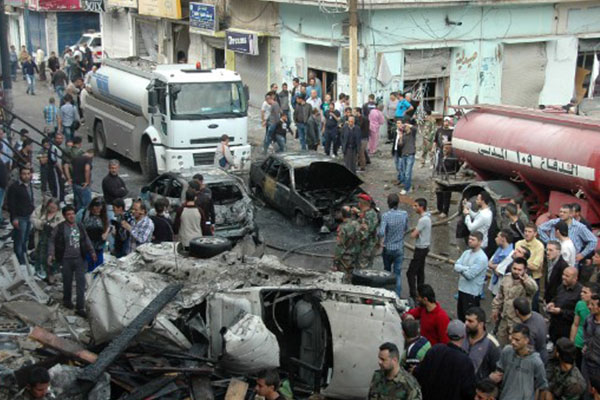 (CNN) — Syrian rebels bombed a hotel used as a base for government forces, the latest massive attack in the seesaw battle for the country’s largest city.

The Islamic Front, Syria’s most powerful rebel alliance, claimed responsibility for the blast on Twitter. The group said it targeted the Carlton Citadel Hotel and several other buildings in the old city of Aleppo.

According to the opposition Syrian Observatory for Human Rights, at least 14 people were killed and dozens were injured.

The blast took place near historical ruins in Aleppo.

Syrian state-run TV said the army confronted “terrorist mercenaries as they tried to clash with the army after they dug a tunnel and detonated their bomb.”

A military source said the Syrian army managed to control the area and “killed scores of these terrorists,” the network said.

Government forces and rebels have been battling for control of Aleppo throughout Syria’s 3-year-old civil war.

After a fierce government crackdown, the peaceful protests spiraled into an armed rebellion, with rebels demanding al-Assad’s ouster.

The Syrian regime has consistently said it is battling “terrorists.”

As the battles rage on, foreign fighters — including radical militants — have joined both sides of the civil war.

Well over 100,000 people, including many civilians, have been killed in the past three years.