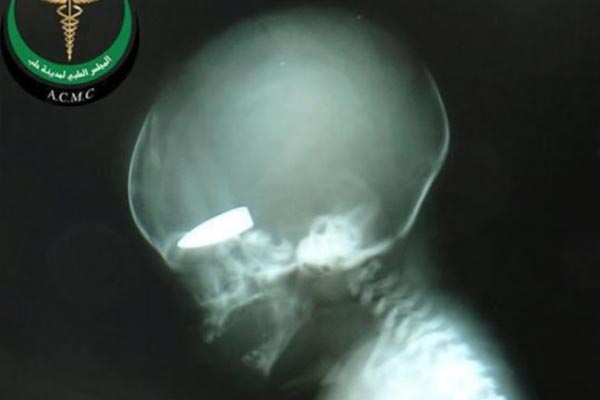 (CNN) — An X-ray shows a bullet lodged in a baby’s head. The image would be chilling enough without knowing the child was still in its mother’s womb when it became the target of snipers hiding in the shadows in northern Syria.

The mother survived. Her baby didn’t. And it’s not the only one.

“Most of the children removed were seven, eight, nine month’s gestation, which meant it was fairly obvious to anybody that these women were pregnant.”

Photos provided to CNN by Syria Relief show a young girl with painted nails lying in a hospital bed with head wounds. She appears no more than five years old. Another, around the same age, lies under a green sheet with a gaping wound to her forehead.

Nott said 90% of surgeries he performed on any given day were for sniper wounds.

On some days, the wounds were suspiciously similar.

“After a while we noticed that there were certain trends going on,” Nott said.

“Then the following day they were targeted in the right groin only. So it seemed to me like there was some of thing going on — a game going on — between the snipers.”

Knott said other local doctors he worked with told him they’d heard snipers were receiving little presents — like packets of cigarettes — for people they’d shot during the day.