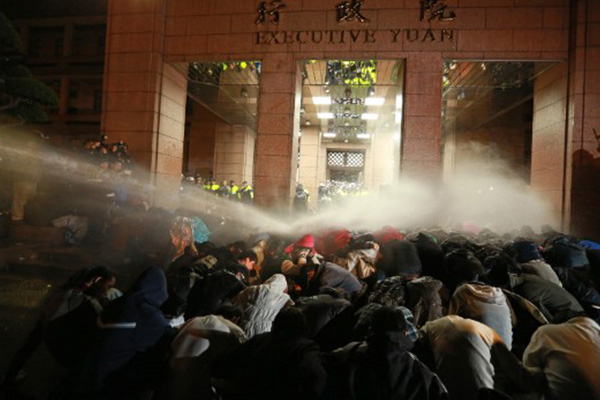 Taiwan police clash with students in protests over trade deal

Meanwhile, other protesters continue their sit-in at the nearby legislature building, where they have been since March 18.

“We are tired, very tired. But we will continue on for democracy,” a spokesperson for the movement, Lin Fei-fan told CNN on Monday.

“We have been protesting for seven days now. After last night’s violence we are shaken,” he said.

Lin estimated there were up to 200 protesters inside the Legislative Yuan’s main assembly hall Monday, with more outside the building.

“Last night many students were injured and bloodied, some got concussions and bone fractures,” he said.

According to Taiwan’s Central News Agency, at least 137 people, including protesters, police and journalists, have been hospitalizedsince the rallies began last week. Most had minor injuries.

Taiwan’s premier Jiang Yi-huah said some 61 people were arrested for breaking into the executive building, including 35 who were still being questioned as of Monday morning, CNA reported.

Dubbed the “Sunflower Movement” by Taiwanese media, the protesters are calling on the government to scrap a controversial trade deal which was signed in Shanghai last year.

They say the agreement will threaten small business and allow China to exert greater influence in the island through investments in “sensitive and core industries,” including those associated with press freedom such as publishing and advertising.

On Sunday, Taiwan’s President Ma Ying-jeou defended the pact with China — the island’s biggest trade partner — and said that it would benefit the economy and create jobs for young people.

“Regional economic integration is an unstoppable global trend. If we do not face this and join in the process, it will only be a matter of time before we are eliminated from the competition. For the sake of the nation’s development, we truly have no choice,” Ma said.

Some Taiwanese believe parts of the agreement are beneficial to Taiwan’s future, but many are incensed by what they believe were procedural errors in passing the pact.

“We feel that the content of the agreement was developed in ‘black box’ negotiations,” protest leader Lin said.

“The opinions of workers were not consulted and it was passed without deliberation. This is against our democratic principles.”

Taiwan and China signed the trade pact in June last year, but a review of the deal has been delayed in the legislature. On March 17, the governing party Kuomintang pushed the pact forward without bipartisan deliberation; a move that the opposition said broke an agreement that all legislators would consider the deal line by line.

The Kuomintang has since agreed to review the pact one clause at a time during a second reading of the deal.

President Ma is taking a hard stance against the students. His government did not respond to a March 21 ultimatum by protesters to issue an apology for the deal. On Sunday, Ma appeared in public to address the protests for the first time:

The protesters have called for a students’ strike across Taiwan commencing Monday. Student unions from four major universitiessaid they will participate.

The director of the National Tsing-Hua University’s Institute of Sociology said in a statement that all classes at the institute will be called off for one week. If the government gives the student protesters a “satisfactory response,” classes will resume immediately, he said.

According to Lin, the protest leader, at least 1,000 students were taking part in the strike as of Monday afternoon.

He said that the Taiwanese public has welcomed their campaign.

“I feel that most Taiwanese are supportive of us. They have been very warm towards us. We see parents bringing their kids to come and visit us,” Lin said.

Although Taiwan governs itself as the Republic of China, with Beijing considering it a breakaway province, relations between the former rivals have improved since Ma took office in 2008.

Last month, Taiwan and mainland China held their highest-level talks in more than six decades. The meeting marked the first government-to-government contact since their split in 1949 following the Chinese Civil War. After the talks, they agreed to open a regular communication channel, China’s state media Xinhua reported.