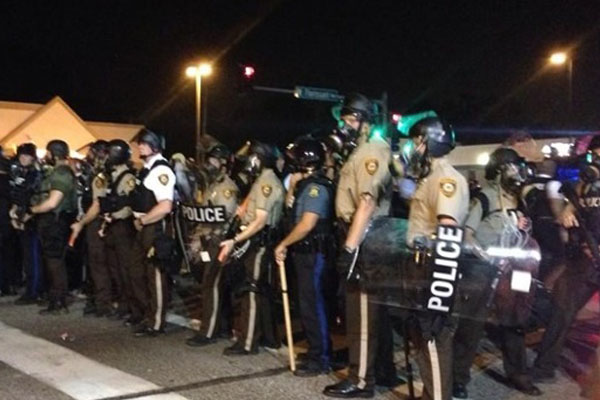 ‘This has to stop’: 31 arrested after fresh confrontation in Ferguson

Stun grenades and tear gas canisters arced through the night sky and into crowds of protesters overnight in Ferguson, Missouri, after police said they had been targeted with rocks, Molotov cocktails and gunfire amid continuing demonstrations over the death of Michael Brown.

Police and protesters blamed outside agitators for the gunplay and violence.

“We don’t need these antagonizers out here,” said protester Jerrell Bourrage, who earlier grabbed one of the bottle-hurling demonstrators and told him to stop. “We need people who can stand out here to the side and still let your word be known.”

The protests are the latest spasm of violence over the shooting of Brown, an unarmed African-American teenager, by white police Officer Darren Wilson on August 9.

As police and protesters search for a way to stop the chaos,Brown’s parents appeared on NBC’s “Today” to appeal for justice and say there’s just one way out of all this.

For almost two hours, police in riot gear formed a barricade and stood watch as hundreds of protesters marched in a single-file line that stretched so long that different parts chanted different slogans.

“Hands up, don’t shoot,” some repeated. “No justice, no peace,” others said. Still others were singing church hymns.

But the scene quickly deteriorated after a handful of protesters threw rocks, bottles and Molotov cocktails at police. Officers responded by firing stun grenades and tear gas canisters.

Amid the frenzy, gunshots could be heard. Police found two people shot within the protest site, said Missouri State Highway Patrol Capt. Ron Johnson, who is in charge of protest security.

One group of protesters made a barricade with portable toilets and orange cones. Some ripped out street signs, including a symbolic “Do Not Enter” sign.

Armored vehicles rolled down the streets with officers perched atop, their hands steadied on guns. Other officers darted into the protest crowd to make an occasional arrest before retreating.

Johnson said that a building and an unoccupied house were set on fire, and that his officers came under “heavy gunfire.”

“We have been criticized for using SWAT trucks during protests. We did not deploy them into crowds until things deteriorated,” he said. “Once again, not a single bullet was fired by officers despite coming under heavy attack.”

CNN accounts of the protest varied.

On Monday night, CNN’s Jake Tapper echoed the frustrations of many in the crowd.

“Absolutely there have been looters, absolutely over the last nine days there has been violence, but there is nothing going on in this street right now that merits this scene out of Bagram. Nothing.

“So if people wonder why the people of Ferguson, Missouri, are so upset, this is part of the reason. What is this? This doesn’t make any sense.”

However, on Tuesday morning, CNN’s Steve Kastenbaum said the police response was among the more restrained in several nights of demonstrations. Police, he said, appeared to be very targeted in responding to “bad actors.”

“There are people in this crowd who are here to do more than protest, who come here armed” Kastenbaum said.

To be sure, Johnson displayed weapons seized early Monday.

CNN correspondent Ed Lavandera told of watching community religious leaders “get up in the face” of troublemakers in a failed effort to dissuade them from violence.

“Get out of the street! Don’t fight!” some protesters bellowed on bullhorns.

Others, like Bourrage, told hold of the agitators and tried to get them to stop.

“I came to keep my brothers safe,” Bourrage said. “We have fathers, brothers, mothers and aunties out here.”

Malik Shabazz, national president of Black Lawyers for Justice, blamed unspecified outside provocateurs for the trouble.

“We can’t allow this movement to be destroyed,” he said.

‘Make your voices heard’ — during the day

Johnson, during an early morning news conference, urged demonstrators to protest during the daylight hours Tuesday and not after dark.

“Make your voices heard where you can be seen and you’re not the cover for violent agitators,” he said.

“There is a dangerous dynamic in the night. It allows a small number of agitators to hide in the crowd and then attempt to create chaos.”

Earlier, in an interview with CNN, Johnson added, “This has to stop.”

“It has to stop,” he said about the violence.” I don’t want anybody to get hurt. We have to find a way to stop it.”

Monday’s chaos followed a day rich in developments, including details of a private autopsy and details of what Officer Wilson reportedly says happened.

The autopsy showed that Brown had been shot at least six times, including twice in the head. The findings are more than enough to justify Wilson’s arrest, Brown family attorney Daryl Parks said Monday.

“What was the cause of that excessive force?” he said. “Nobody deserved that.”

Also on Monday, an account emerged of a telephone call to “The Dana Show” on the Radio America network from a woman claiming to know Wilson’s version of events. According to the account — which a source with detailed knowledge of the investigation said tracks with Wilson’s version of events — Brown rushed Wilson in the moments before the shooting.

Witnesses who have come forward publicly say Brown was standing with his hands in the air when he was shot.

A grand jury could begin to hear testimony from witnesses and decide on whether to return an indictment in the case as early as Wednesday.

In addition to that proceeding, the Justice Department has opened a civil rights investigation into Brown’s death.

The Ferguson-Florissant School District has canceled school for the week, and two nearby districts — Jennings and Riverview Gardens — opted to remain closed again Tuesday as well, according to CNN affiliate KMOV.

Some businesses have also been looted or burned, prompting some store owners to arm themselves and stand guard over their shops, according to local media reports.