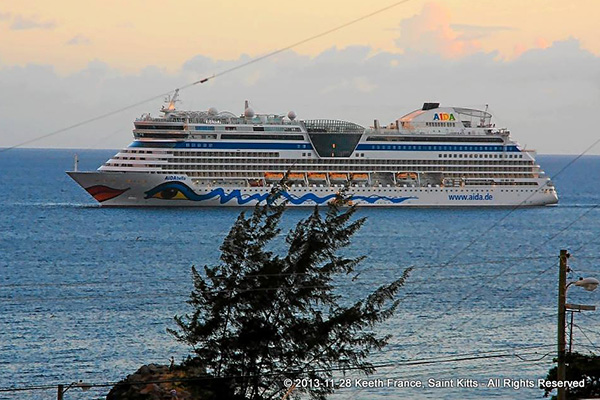 (CUOPM) – Three of the four cruise ships that grace the Port of Basseterre on Thursday were on their inaugural or first visit to St. Kitts.

A total of 15 new cruise ships are scheduled to make inaugural calls to St. Kitts during the 2013/2014 cruise ship season.

The Italian-registered AIDAbella dropped anchor in the Port of Basseterre with 2,033 passengers. The cruise ship operated by AIDA Cruises was built at Meyer Werft shipyard in Papenburg, Germany and was on an unscheduled visit. The AIDAbella is to make 9 more calls to St. Kitts.

Also on its inaugural call was the 92,000 ton MSC Musica with 2,271 passengers and docked at Port Zante. The first Musica-class cruise ship was built in 2006 and operated by MSC Cruises. It has 13 decks and will only make one call this season.

Docking at the deep water port with 973 passengers was the MV Horizon operated by Croisières de France.

Veteran photographer, Mr. Keethon France captured the vessels as the departed for St. Kitts early Thursday night for their next destinations.

The next new cruise ship to visit is the 450-passenger Azamara Quest which docks on December  2nd, the 2,680-passenger Costa Mediteranea on December 18th and the 446-pasenger Saga Ruby on December 23rd.