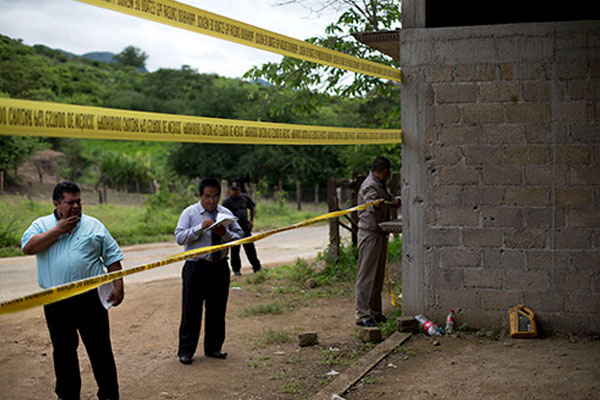 MEXICO CITY, Mexico (AP) — Months after the Mexican army said it had killed 22 suspected gang members in a fierce shootout, three soldiers are being charged with homicide.

The announcement late Tuesday was just another step in dismantling the official version of the June 30 confrontation, which came under question almost immediately because of the lopsided outcome. Only one soldier was injured.

But Attorney General Jesus Murillo Karam’s version of events raised more questions about the killings in an abandoned warehouse in southern Mexico that a witness said happened after the suspects had surrendered — and that the U.N. urged be investigated as possible “summary executions.”

After a brief initial firefight with eight soldiers, three of them entered a warehouse where the suspects had taken refuge and opened fire with “no justification whatsoever,” Murillo Karam said in a news conference. He offered no details on whether the suspects had already surrendered, whether they were unarmed, or how three soldiers could kill 21 people without anyone trying to flee a wide-open, hangar-like building. One suspect was killed in the initial firefight, according to the witness.

“Doesn’t it seem strange that eight soldiers face off against 22 suspects and all the deaths are on the side of those with numeric superiority?” said Alejandro Hope, a Mexico City-based security analyst. “What was this, a squad of Rambos? Or had the suspects already been disarmed? Whichever way, this doesn’t smell good.”

The military initially said that the prolonged confrontation occurred when a patrol unit came under fire in the town of San Pedro Limon, an area in Mexico state known to be dominated by drug cartels. The witness, who asked that her name not be used for fear of reprisals, told The AP that the army fired first. She said the 21 had given up and walked out of the warehouse and that soldiers led them back inside and killed them. Her daughter, 15-year-old Erika Gomez Gonzalez, who had been wounded in the leg in the initial shootout, was turned over and shot several times in the torso, the witness said.

She said Tuesday that all of the soldiers at the scene were involved in the shooting, not just three, though she couldn’t remember exactly how many were present.

Though the incident occurred three months ago, she said she still hasn’t been interviewed by federal investigators, and by Mexico’s human rights investigators just within the last two weeks. The attorney general’s office would not say if it had interviewed the witness, and the human rights commission couldn’t be immediately reached for comment.

An AP review of the warehouse days after the shooting showed a few stray shots and no sprays of gunfire within the large grain warehouse where the alleged gang was hiding. Instead, bullet holes and blood stains indicated some were shot near or against the walls at close range.

Photographs from the scene leaked to a local news agency showed most of the bodies against the wall, with guns lying near or propped against them to appear as if they went down shooting.

Last week, the army detained one officer and seven soldiers for disobedience and dereliction of duty in relation to the incident. Those <

Murillo Karam said Tuesday a squad of seven soldiers and a lieutenant were involved in the killings. While a battalion has about 550 soldiers, normally platoons of about 30, led by a lieutenant, are sent to fight drug traffickers, according to a person close to the military who was not authorized to the speak to the press.

Murillo Karam said five of the eight-man squad appeared to have stayed outside while the killings occurred. He said there were doubts about one enlisted man’s account that could lead to a fourth set of charges. They would be formally arraigned on Wednesday, he added.

“From the start, we had detected some inconsistencies,” he said.

But he did not explain why it took federal investigators 2 ½ months to file charges. His office would not say when it took the case from the prosecutor in Mexico state. AP reporters revisited the bodega two weeks ago, and there were no signs of a federal investigation. But photographs in the national newspaper Milenio on Tuesday showed the warehouse roped off with attorney general’s office caution tape and markings of the bullet holes, indicating that investigators only arrived within the last two weeks.

Nor did Murillo Karam explain why his findings directly contradicted those of Mexico state prosecutors, who said in a July 15 statement that their investigations had found “an equal exchange of fire” and “no evidence at all of any possible execution.”

He did not address the fact that autopsy reports on the victims have been classified as state secrets for nine years.

Rights groups have said the killings may prove to be one of the most serious massacres in Mexico in recent memory.

“The civilian justice system has been totally discredited and looks very bad,” said Raul Benitez, a security expert at Mexico’s National Autonomous University. “It looks as if they don’t perform objective investigations, but rather do them for political purposes and to cover up crimes.”