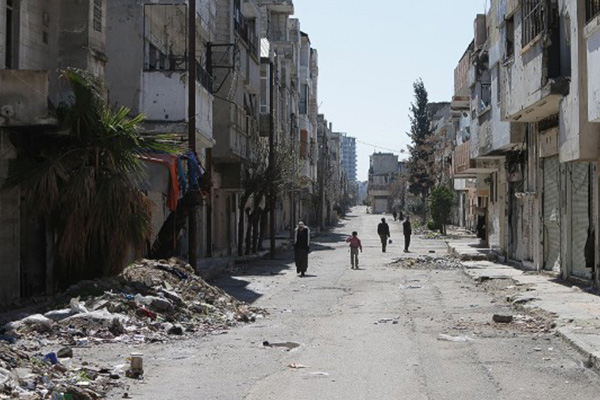 Truce in key Syrian city of Homs goes into effect

(CNN) — A truce between Syrian government and rebel forces in the strategic and symbolic city of Homs has gone into effect, the opposition Syrian Observatory for Human Rights said Wednesday.

An operation to evacuate opposition fighters and their families from the Old City of Homs has begun, the London-based group said.

The ancient city of Homs became known as the capital of the uprising against the regime of Syrian President Bashar al-Assad. It has experienced some of the worst of the violence in a bloody civil war that has left more than 100,000 people dead and driven millions of people from their homes across the country.

As many as 2,500 people are thought to be trapped in Homs, parts of which have been under siege since June 2012. Efforts to get humanitarian aid to those inside the city have been plagued by difficulties amid the fighting.

Syrian rebels have said that the truce in the city was brokered after they agreed to release 70 Lebanese Hezbollah fighters, 20 Iranian officers captured by the Islamic Front in Aleppo and an Iranian female agent who was captured at the end of March. Hezbollah and Iran have backed al-Assad’s government in the war.

Under the deal, once the opposition fighters reach their final destination in Al-Dara Al-Kabira in the province of Homs, the first group of pro-regime prisoners will be released from the towns of Nubul and Zahra in rural Aleppo.

Representatives of the rebel fighters and of Islamic battalions have negotiated in recent days with those of Syrian government forces, the pro-regime National Defense militias, the Lebanese Shiite group Hezbollah and the Governor of Homs, according to the observatory.

The talks were mediated by civil committees and the United Nations in the presence of representatives from the Iranian and Russian embassies.

In a statement to the state-run Syrian news agency SANA, Homs Governor Talal al-Barazi said that the process of settlement and reconciliation will begin simultaneously with the rebels’ departure so as to have the city cleared of arms.

After the city is cleared, a Syrian army unit will begin a search to detect and dismantle explosive devices, mines and remove barricades, he said.

Syria’s opposition has tried to spin the truce as a victory over al-Assad’s regime. But handing over control of the city could be a strategic setback.

“This deal proves that the Assad regime is a puppet manipulated by Iran, and that it is the sole importer of terrorists, and perhaps the exclusive agent of terrorism in the region,” Noura Al Ameer, vice president of the opposition Syrian Coalition, said before the truce went into effect.

Governor al-Barazi has said the removal of rebel fighters and weapons from Homs will help the government improve security and stability in Syria.

But the coalition has expressed doubt that the truce will hold.

“We fear for the safety of those in Homs as the regime has always reneged on its promises,” the group said.

The Syrian Observatory for Human Rights has said that the Homs pact will call for: