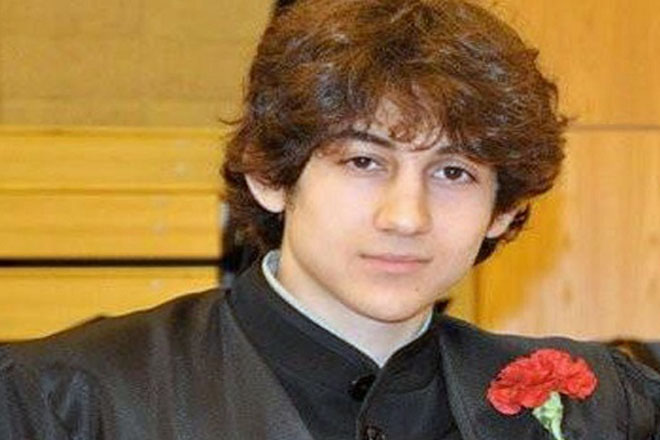 Tsarnaev guilty on all charges in Boston Marathon bombing

Boston, United States (AP) — Dzhokhar Tsarnaev was convicted on all charges Wednesday in the Boston Marathon bombing by a jury that will now decide whether the 21-year-old should be executed or shown mercy for what his lawyer says was a crime masterminded by his big brother.

The former college student stood with his hands folded, fidgeted and looked down at the defense table in federal court as he listened to the word “guilty” recited on all 30 counts against him, including conspiracy and deadly use of a weapon of mass destruction. Seventeen of those counts are punishable by death.

The verdict, reached after a day and a half of deliberations, was practically a foregone conclusion, given his lawyer’s startling admission at the trial’s outset that Tsarnaev carried out the terror attack with his now-dead older brother, Tamerlan.

The defence strategy is to try to save Tsarnaev’s life in the upcoming penalty phase by arguing he fell under Tamerlan’s evil influence.

The two shrapnel-packed pressure-cooker bombs that exploded near the finish line on April 15, 2013, killed three spectators and wounded more than 260 other people, turning the traditionally celebratory home stretch of the world-famous race into a scene of carnage and putting the city on edge for days.

Tsarnaev was found responsible not only for those deaths but for the killing of a Massachusetts Institute of Technology police officer who was gunned down days later during the brothers’ getaway attempt.

“It’s not a happy occasion, but it’s something,” said Karen Brassard, who suffered shrapnel wounds on her legs and attended the trial. “One more step behind us.”

She said Tsarnaev appeared “arrogant” and uninterested during the trial, and she wasn’t surprised when she saw no remorse on his face as the verdicts were read. She refused to say whether she believes he deserves the death penalty, but she rejected the defence argument that he was simply following his brother’s lead.

“He was in college. He was a grown man who knew what the consequences would be,” Brassard said. “I believe he was ‘all in’ with the brother.”

In the penalty phase, which could begin as early as Monday, the jury will hear evidence on whether he should get the death penalty or spend the rest of his life in prison.

Defence attorney Judy Clarke argued at trial that Tsarnaev was led astray by his radicalized brother, telling the jury: “If not for Tamerlan, it would not have happened.” She repeatedly referred to Dzhokhar — then 19 — as a “kid” and a “teenager.”

Prosecutors, however, portrayed the brothers — ethnic Chechens who moved to the United States from Russia more than a decade ago — as full partners in a brutal and coldblooded plan to punish the US for its wars in Muslim countries. Jihadist writings, lectures and videos were found on both their computers, though the defence argued that Tamerlan downloaded the material and sent it to his brother.

Tamerlan, 26, died when he was shot by police and run over by his brother during a chaotic getaway attempt days after the bombing.

The government called 92 witnesses over 15 days, painting a hellish scene of torn-off limbs, blood-spattered pavement, ghastly screams and the smell of sulphur and burned hair.

Survivors gave heartbreaking testimony about losing legs in the blasts or watching people die. The father of 8-year-old Martin Richard described making the agonizing decision to leave his mortally wounded son so he could get help for his 6-year-old daughter, whose leg had been blown off.

In the courtroom Wednesday, Denise Richard, the boy’s mother, wiped tears from her face after the verdict. The youngster’s father, Bill Richard, embraced one of the prosecutors.

In Russia, Tsarnaev’s father, Anzor Tsarnaev, told The Associated Press in recent days that he would have no comment.

The others killed in the bombing were Lingzi Lu, a 23-year-old Chinese graduate student at Boston University, and Krystle Campbell, a 29-year-old restaurant manager. MIT Officer Sean Collier was shot to death at close range days later.

In a statement, Collier’s family welcomed the verdict and added: “The strength and bond that everyone has shown during these last two years proves that if these terrorists thought that they would somehow strike fear in the hearts of people, they monumentally failed.”

Some of the most damning evidence at the trial included video showing Tsarnaev planting a backpack containing one of the bombs near where the 8-year-old boy was standing, and a confession scrawled inside the dry-docked boat where a wounded and bleeding Tsarnaev was captured days after the tragedy.

“Stop killing our innocent people and we will stop,” he wrote.

Tsarnaev’s lawyers barely cross-examined the government’s witnesses and called just four people to the stand over less than two days, all in an effort to portray the older brother as the guiding force in the plot.

According to defence testimony, phone records showed Dzhokhar was at the University of Massachusetts-Dartmouth while his brother was buying bomb components, including pressure cookers and BBs. Tamerlan’s computer showed search terms such as “detonator” and “transmitter and receiver,” while Dzhokhar was largely spending time on Facebook and other social media sites. And Tamerlan’s fingerprints, but not Dzhokhar’s, were found on pieces of the two bombs.

Clarke is one of the nation’s foremost death-penalty specialists and an expert at keeping her clients off death row. She saved the lives of Unabomber Ted Kaczynski and Susan Smith, the South Carolina woman who drowned her two children in a lake in 1994.

Tsarnaev’s lawyers tried repeatedly to get the trial moved out of Boston because of the heavy publicity and the widespread trauma. But opposition to capital punishment is strong in Massachusetts, which abolished its state death penalty in 1984, and some polls have suggested a majority of Bostonians do not want to see Tsarnaev sentenced to die.

The 12-member jury must be unanimous for Tsarnaev to receive a death sentence; otherwise the penalty will be life behind bars.

During the penalty phase, Tsarnaev’s lawyers will present so-called mitigating evidence to try to save his life. That could include evidence about his family, his relationship with his brother and his childhood in the former Soviet republic of Kyrgyzstan and later in the volatile Dagestan region of Russia.

Prosecutors will present so-called aggravating factors in support of the death penalty, including the killing of a child and the targeting of the marathon because of the potential for maximum bloodshed.

Dan Collins, a former federal prosecutor who handled the case against a suspect in the 2008 terrorist attacks in Mumbai, India, said Massachusetts’ history of opposition to capital punishment will have no bearing on the jury’s decision about Tsarnaev’s fate.

“When you ask people their opinion of the death penalty, there are a number who say it should only be reserved for the horrific cases,” he said. “Here you have what is one of the most horrific acts of terrorism on US soil in American history, so if you are going to reserve the death penalty for the worst of the worse, this is it.”

Liz Norden, the mother of two sons who lost parts of their legs in the bombing, said death would be the appropriate punishment: “I don’t understand how anyone could have done what he did.”