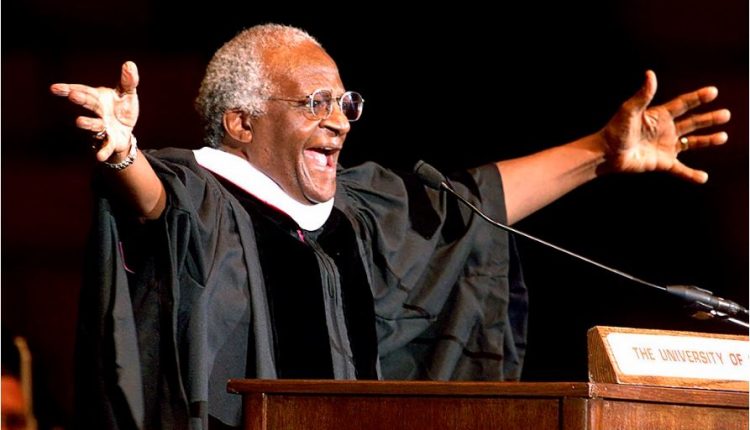 Tutu: A Man Of Empathy, Moral Ardour, And Some Silly Jokes

One Christmas Day in the 1980s, Desmond Tutu led a packed church service in Soweto, the Black Johannesburg township and fulcrum of protest against white racist rule in South Africa. An American family — mine — found standing room at the back.

We were among the few white people in the congregation and, as we shook hands with Tutu on the steps upon leaving, he made a joke. Something like: “So, it really is a white Christmas.”

Evoking the Irving Berlin song ”White Christmas,” famously crooned by Bing Crosby, in tense, dusty Soweto was quintessential Tutu. He couldn’t resist a pun about race in an inflamed country suffering the agonies of apartheid, the system of white minority domination that was extinguished in 1994.

(Actually, every once in a very long while, it has snowed in Johannesburg, but certainly not at Christmas time, which falls in the Southern Hemisphere’s summer).

When Tutu died Sunday at age 90, he was remembered as a Nobel laureate, a spiritual compass, a champion of the anti-apartheid struggle who turned to other global causes after Nelson Mandela, another moral heavyweight, became South Africa’s first Black president. Barack Obama praised Tutu for fighting injustice wherever he saw it.

But the former US president also recalled the activist’s “impish sense of humour.” And it is that Desmond Tutu — the funny, kind, gracious man behind the icon — whom I and so many others recall.

To see Tutu up close was to bask in his rollercoaster laughter, to revel as his eyes would widen theatrically, to luxuriate in his pristinely enunciated remarks, and to come away infused with the man’s joy and warmth. If he had a chance to dance, usually in church, he was on his feet — with the help of a cane in later years, as he grew more frail.

He seemed to embody the best of what it is to be human, at a granular level. The small generosities, the willingness to listen, the empathy, lightening the mood with … let’s face it, some pretty silly jokes.

He kept that up through grim times in South Africa, showing anger and frustration too at dehumanising state policies, the violence of white-controlled security forces and the killing within Black communities as apartheid, a scourge that he described as ”evil,” played out bitterly.

Not everyone was a fan. His moral ardour ran up against realpolitik. His notion of the “rainbow nation,” an idealised vision of racial tolerance, is at odds with the social and economic imbalances of South Africa today.

But he always reached out, always looked for and found the humanity in people. In advance of a small service at St George’s Cathedral in 2015, participants were asked to send photos of themselves; I watched as Tutu went around the congregation, asking each person to say a little about themselves.

I was a boy on that Christmas Day when Tutu riffed on Bing Crosby, and my father was reporting for The Associated Press in South Africa. In 1989, my parents moved to Stockholm. A few months before they departed, a postcard arrived with Tutu’s scrawl on the back.

”Go well. Thanks for your splendid service,” he wrote. “Will miss you. Will certainly try to see you in Sweden. God bless you.”

In time, I became a journalist and also worked for the AP in South Africa, sometimes covering Tutu’s post-apartheid commentary on corruption and other challenges, as well as his hospitalisations for the prostate cancer that afflicted him for nearly a quarter-century.

I would recall the one time he visited our Johannesburg home for dinner. He didn’t stay long. He was charming, easygoing.

Afterwards, he sent us another postcard. On the front was an elephant; on the back was something that could be taken both as a bread-and-butter note and as an unintended valedictory from a remarkable man who, even at age 90, left the world too soon.

“Just an inadequate note to thank you very much for your kind hospitality,” he wrote. “I enjoyed myself and was sorry to have to leave early. God bless you.”

It was signed, simply, “Desmond.”