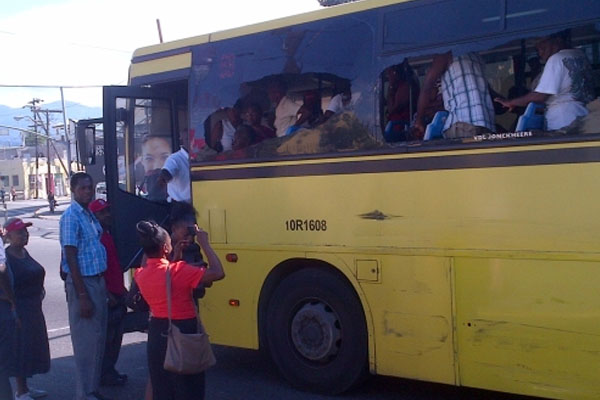 Kingston, Jamaica — There is a massive traffic pile up in Cross Roads, St Andrew, after two Jamaica Urban Transit Company (JUTC) buses crashed along Slipe Road a short while ago.

Reports are that about 9:00 am a number 42 bus was exiting the Cross Roads bus park when it crashed into another JUTC bus, a number 68 travelling from downtown Kingston, leaving numerous passengers suffering minor injuries.

“I was in the bus minding my own business when all of a sudden I heard a loud crash,” said a shaken commuter Lovelette Murphy.

She was one of several passengers in the bus when the collision occurred.

Marjorie Howe another passenger said that she was left in shock after the incident.

“I was so frightened I couldn’t speak,” said Howe.

Police are now at the scene.