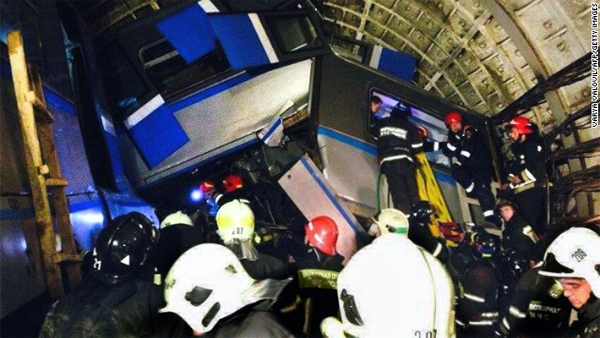 The pair held on suspicion of violating transport safety rules are a maintenance foreman, Valery Bashkatov, and his assistant, Yury Gordov, a statement on the committee’s website said.

The men were involved in overseeing recent work on a rail junction switch on a section of track between Park Pobedy and Slavyansky Bulvar stations, the committee said.

“Investigators believe that the works themselves were conducted improperly,” the statement said. Cable used in the works broke, leading to the derailment, it said.

The two suspects have been questioned and the authorities intend to charge them soon, the committee said. Meanwhile, investigators are continuing to examine the circumstances of the derailment and others involved in the works.

“The Investigative Committee intends to establish and bring to justice all those involved into this tragedy, from performers to top officials who had to supervise and ensure the full requirements of the transport safety rules of the Moscow Metro,” the statement said.

Another 160 were injured, of whom more than 120 were hospitalized, according to the Moscow health care department. Of those, a few dozen were in critical condition.

Moscow Mayor Sergei Sobyanin said Wednesday would be a day of mourning.

The head of Moscow’s Transportation Department said Tuesday the derailment was not the result of a terrorist attack. However, a criminal investigation was launched into what was behind the crash.