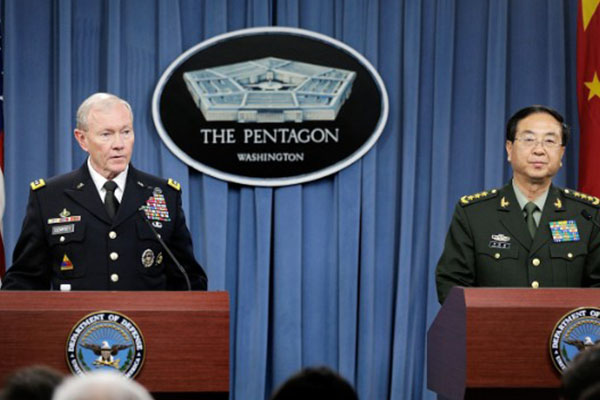 (CNN) — The United States and China put on sharp display Thursday their continuing differences over territorial disputes in the South and East China Seas, disputes that are now boiling over into violence.

In a joint news conference at the Pentagon, Joint Chiefs Chairman Gen. Martin Dempsey and his Chinese counterpart, Gen. Fang Fenghui, described their private discussions as “refreshingly frank” and “constructive” before expressing opposing views of who is to blame for the broadening tensions.

China and Vietnam are currently locked in a standoff after China installed an oil rig on an island in the Paracel chain (jointly claimed by the two countries), sparking protests in Vietnam, including violent attacks on Chinese and ethnic Chinese residents.

Fang said, “We do not make trouble but we are not afraid of trouble,” adding “in matters of territory, our attitude is firm. We won’t give an inch.”

Dempsey countered, “We have to acknowledge there are territorial disputes,” including “what exactly is the status quo and who is seeking to change it.”

It was a veiled reference to Washington’s position that Beijing is attempting to change the status quo by more aggressively seeking to establish control over numerous island chains simultaneously claimed by China and several South East Asia nations.

In addition to the current standoff between China and Vietnam, China and Japan both claim sovereignty over the Senkaku Islands, while China and the Philippines are competing for control over several small land formations, such as the Scarborough Shoal.

On his recent trip to Asia, President Barack Obama announced a new military base access agreement with the Philippines.

The United States says it takes no position on sovereignty but encourages all sides to resolve the disputes through diplomacy.

In response to China’s installation of the oil rig in the Paracel Islands, the State Department released a statement this week saying, “This unilateral action appears to be part of a broader pattern of Chinese behavior to advance its claims over disputed territory in a manner that undermines peace and stability in the region.”

Despite the differences that exist over these issues, Dempsey announced that China would participate in the bi-annual Rim of Pacific naval exercise that takes place in Hawaii.

Dempsey also announced a secure video conference link between him and Fang will be established later this year.