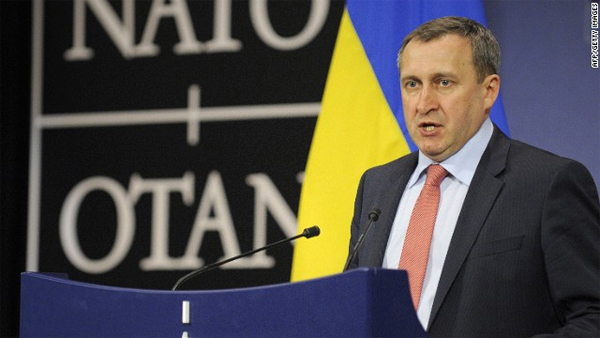 Kiev, Ukraine (CNN) — Armed men clashed with Ukrainian border guards Saturday after a separatist leader was detained at a checkpoint. He was trying to re-enter the country from Russia, the Ukrainian Border Service said.

The incident is the latest violent flare-up in eastern Ukraine, where pro-Russia separatists staged a referendum on independence last weekend.

Following his detention, about 200 armed men arrived at the checkpoint and demanded his release.

The border guards tried to avoid bloodshed, but after an altercation, shots were fired. In the ensuing armed assault on the checkpoint, “the attackers” were able to take back Bolotov, the statement said.

They were no casualties in the incident, separatist spokesman Vasiliy Nikitin said. The fight involved about 150 fighters on each side, he said. Bolotov had gone to Russia for medical treatment after being wounded on Tuesday.

Separatist groups have declared “people’s republics” in both Luhansk and Donetsk.

Neither the West nor the interim government in Kiev consider the two regions’ referendum on independence as legitimate.

Tensions remain high across the country’s east, with just over a week to go before May 25 presidential elections.

Russia’s Foreign Ministry called Saturday for an end to what the Kiev government describes as an anti-terrorist operation against the separatists — and questioned whether it was possible to hold elections given the militarized situation.

In its statement, the ministry accused Ukrainian troops backed by aircraft of trying to storm the town of Slovyansk and of using heavy artillery to shell “civilian installations.”

“Such punitive action against its own citizens shows the hypocrisy of the Kiev authorities,” the statement said, referring to an international pact agreed to last month which called for an end to violence.

The militants have put up 27 barricades around the town, where they still hold a number of public buildings, the Defense Ministry is quoted as saying.

The report paints a troubling picture, citing cases of targeted killings, torture, beatings, abductions and sexual harassment, as well as intimidation of the media.

It also highlighted serious problems in Crimea, Ukraine’s Black Sea peninsula that was annexed by Russia in March, particularly for the minority ethnic Tatar population.

Russia’s Foreign Ministry dismissed the findings of the U.N. report, saying it showed a “complete lack of objectivity, total inconsistencies and double standards.”

Kiev and the West have condemned the annexation of Crimea and accuse Moscow of backing the pro-Russia militants in Ukraine’s east. Moscow blames the unrest in Ukraine on far-right ultranationalist groups.