Warning: session_start(): open(/var/cpanel/php/sessions/ea-php56/sess_82713dc3ef41ee16aa9e3774fc3c877d, O_RDWR) failed: No such file or directory (2) in /home/zizon/public_html/wp-content/plugins/iphorm-form-builder/includes/common.php on line 86 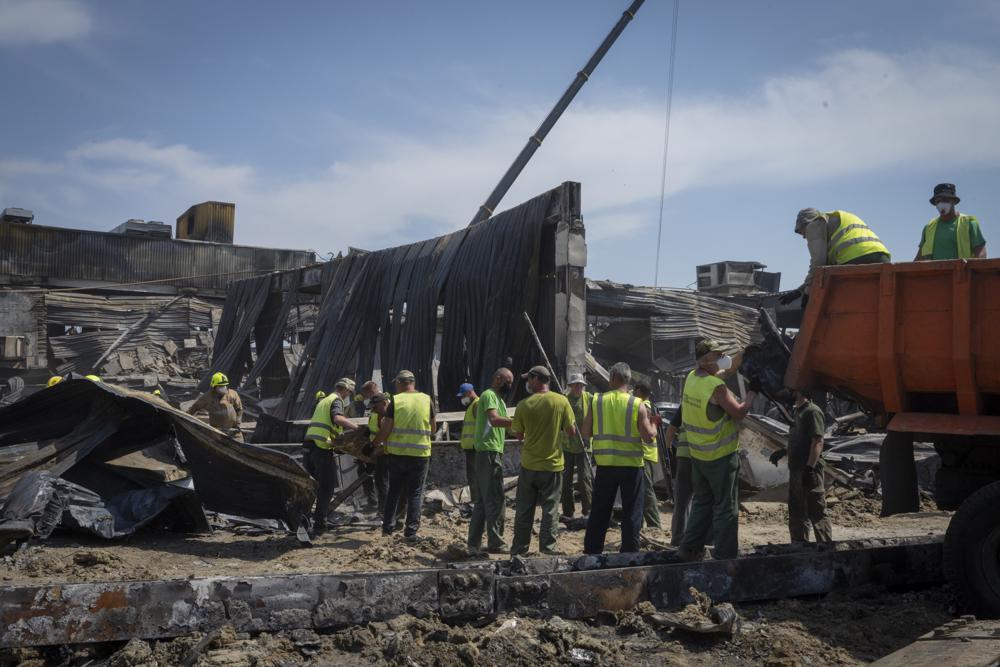 Kremenchuk, June 29, 2022 (AP) — Russian forces battled Wednesday to surround the Ukrainian military’s last stronghold in a long-contested eastern province as shock reverberated from a Russian airstrike on a shopping mall that killed at least 18 people in the center of the country a day earlier.

Moscow’s battle to wrest the entire Donbas region from Ukraine saw Russian forces pushing toward two Luhansk province villages south of the city of Lysychansk while Ukrainian troops fought to prevent their encirclement.

Britain’s Defense Ministry said Russian forces were making “incremental advances” in their offensive to capture the city. Lysychansk is the last major area of the province under Ukrainian control following the retreat of Ukraine’s fighters from the neighboring city of Sievierodonetsk.

Russian troops and their separatist allies control 95% of Luhansk and hold about half of the Donetsk region, the other province that makes up the mostly Russian-speaking Donbas.

The latest assessment by the Institute for the Study of War, a think tank based in Washington, said the Ukrainians were likely in a fighting withdrawal to seek more defensible positions while draining the Russian military forces of manpower and resources.

Meanwhile, crews continued to search through the rubble of the shopping mall in Kremenchuk where Ukrainian authorities say 20 people remained missing. Authorities in the city declared three days of mourning.

The blast from Tuesday’s airstrike was so powerful, that relatives may not be able to recover any trace of their loved ones’ remains.

Ukrainian State Emergency Services press officer Svitlana Rybalko told The Associated Press that along with the 18 people killed, investigators found fragments of eight more bodies. It was not immediately clear if the body parts meant there were more victims. A number of survivors were being treated for injuries such as skull fractures and severed limbs.

“The police cannot say for sure how many (victims) there are. So we are finding not the bodies but the fragments of bodies,” Rybalko said. “Now we are clearing at the very epicenter of the blast. Here, we practically cannot find bodies as such.”

Several families stood by what was left of the Amstor shopping center Wednesday morning in hopes of finding missing loved ones. One young woman sat cross-legged on the ground weeping behind dark sunglasses,.

“This is pure genocide,” local resident Tatiana Chernyshova said while going to lay flowers at the site. “Such things cannot happen in the 21st century. Peaceful people suffer.”

“We need to engage everyone to help stop the war, help us fight these scum – these Russian aggressors,” Chernyshova said. “It needs to be stopped by any means possible.”

Psychologists working at the site with families told the AP they were trying to help people come to terms with their loss.

“We are trying to help them release their emotions now, as later it becomes harder and much more painful,” said one psychologist, who did not give his name as he was not authorized to speak to the press.

After the attack on the mall, Ukrainian President Volodymyr Zelenskyy accused Russia of becoming “a terrorist” state carrying out “daily terrorist acts.” On Wednesday, he reproached NATO for not embracing or equipping his embattled country more fully.

“The open-door policy of NATO shouldn’t resemble old turnstiles on Kyiv’s subway, which stay open but close when you approach them until you pay,” Zelenskyy told NATO leaders meeting in Madrid, speaking by video link. “Hasn’t Ukraine paid enough? Hasn’t our contribution to defending Europe and the entire civilization been sufficient?”

He asked for more modern artillery systems and other weapons and warned the leaders they either had to provide Ukraine with the help it needed to defeat Russia or “face a delayed war between Russia and yourself.”

Russian Foreign Ministry spokeswoman Maria Zakharova on Wednesday dismissed what she claimed was the Ukrainian government’s “blatant provocation” in trying to blame the mall missile strike on Russia’s military.

“All these fakes, unfortunately, were replicated and distributed,” Zakharova said.

Britain’s Defense Ministry said there was a “realistic possibility” the missile strike on the shopping center “was intended to hit a nearby infrastructure target.”

“Russian planners highly likely remain willing to accept a high level of collateral damage when they perceive military necessity in striking a target,” the ministry said. “It is almost certain that Russia will continue to conduct strikes in an effort to interdict the resupplying of Ukrainian front-line forces.”

Russia’s military also is experiencing a shortage of “more modern precision strike weapons” that together with “the professional shortcomings of their targeting planners” is compounding civilian casualties, the British ministry said.

Mykolaiv is a major port in Ukraine’s south and seizing it – as well as Odesa further west – would be key to Russia’s objection to cutting off Ukraine from its Black Sea coast.

Russia’s Defense Ministry said in a statement that the missile strike on Mykolaiv targeted a base for training “foreign mercenaries,” as well as ammunition depots.

Russian forces have been regularly pummeling Ukrainian weapons and munitions depots, oil storage, and other facilities across Ukraine.

Vitali Klitschko, the mayor of Ukraine’s capital, Kyiv, urged the NATO leaders in Madrid to do whatever it took to stop the war, saying that if Ukraine is defeated, “you’re going to be next.”

Britain is imposing sanctions on Russia’s second-richest man and a cousin of President Vladimir Putin. Vladimir Potanin, the owner of the Interross conglomerate, has continued to amass wealth while backing Putin, acquiring Rosbank and shares in Tinkoff Bankonith in the period following the invasion of Ukraine, a U.K. government statement said Wednesday

The statement said Putin’s cousin, Anna Tsivileva, and her husband, Sergey Tsivilev, have “significantly benefited” from their relationship with Putin. Tsivileva is president of the JSC Kolmar Group coal mining company, and Tsivilev is governor of the coal-rich Kemerovo region.