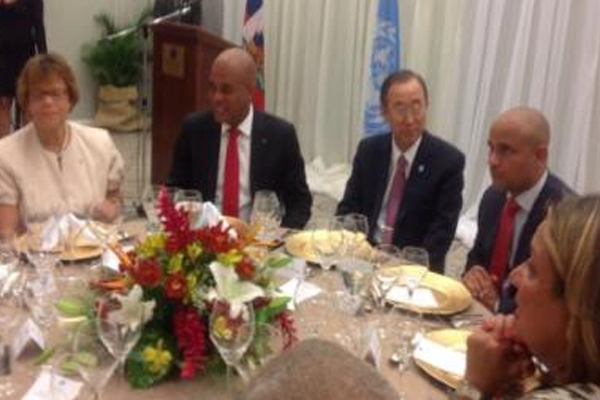 Ban Ki-moon and Haitian Prime Minister Laurent Lamothe launched on Monday the national decontamination campaign in the Las Palmas district in the Central Plateau where the cholera epidemic first broke in Haiti in October 2010.

“We are here today to launch an important initiative which can protect people from diseases transmitted through water,” said Ban, during a ceremony in Las Palmas.

“An initiative that can help to eliminate cholera in Haiti and that can improve lives,” explained Ban, who arrived in Haiti on a two-day visit.

The UN secretary-general explained that the launch of the “total sanitation campaign” was a great step in the development process of Haiti, given that one in every two Haitians does not have access to an adequate level of sanitation.

The campaign will cost $2.2 billion over ten years and the money will be collected with major international donors by the UN. The program will help millions to get access to potable water and other sanitation means.

It is widely believed that the disease was brought to the country by a UN Nepalese military contingent that had just arrived from Nepal shortly before the cholera outbreak, nearly four years ago.

“Whatever I may say today will not reduce the pain you feel, after you have lost your loved ones,” Ban said.

“As secretary general, I want to ensure you that the UN and its partners are strongly committed to eradicating the epidemic as soon as possible,” he added.

“As far as the cholera disease is concerned, our struggle was always to get the UN to engage, with the Haitian government, in efforts to eradicate cholera,” said Martelly.

“We did not want to engage in a fight with the organization so that we may receive their support to fight cholera instead of us fighting each other,” he said.

The campaign aims to reach 3.8 million people in five years, in the 20 most cholera-affected districts throughout the country.

“I thank the UN secretary-general for recognizing the moral responsibility that the UN has to help us fight against cholera,” stated Lamothe.

Officials say that the number of cases of cholera decreased by 74% this year compared to the same period last year.

The Haitian minister of health, Florence Duperval Guillaume, called on donors to live up to their promises by contributing funds pledged to help reduce and eradicate cholera in Haiti.

A high level committee was appointed recently by the Haitian government and the UN to coordinate efforts in that regard. The committee is co-chaired by Guillaume and the UN secretary-general’s special representative in Haiti, Sandra Honore.