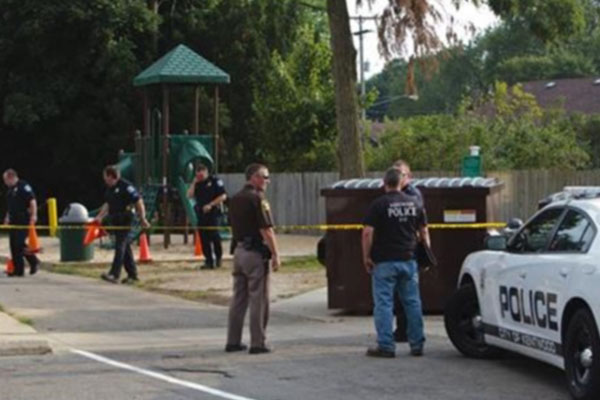 KENTWOOD, Mich. (AP) — A 9-year-old boy repeatedly stabbed by a 12-year-old at a Michigan playground ran screaming to his home and collapsed bleeding on his porch before dying at a hospital a short time later, witnesses and police said Tuesday.

Witnesses said the 12-year-old boy went to a nearby home after the Monday evening attack on Michael Conner Verkerke, called 911 and calmly turned himself in, then tried to flag down officers when they arrived.

The 12-year-old pleaded not guilty to a murder charge in juvenile court Tuesday, according to his attorney. He was ordered held in a juvenile detention centre until a hearing next week. A motive for the attack still was being investigated, Kentwood Police Chief Thomas Hillen said.

Barb Poelman said she was sitting on her deck in the Pinebrook Village mobile home park in the western Michigan city of Kentwood when “we heard the kids run across the front … screaming. He (Michael) ran with the kids that were with him.”

She said the boy’s mother was distraught, pleading for help as she lay on the grass outside the family’s home.

“She was screaming, ‘Where is the ambulance?’ while her boy was laying on the porch bleeding,” Poelman said. “The kids, I thought they were just playing.”

Witnesses told investigators that four children were playing when one of them, for unknown reasons, pulled a knife and stabbed the boy in the back.

Glen Stacy, who lives nearby, said that the older boy approached him after the attack and asked to use his phone. He said the boy called 911 to report the attack and turn himself in.

Stacy said he also called police and described the boy as “very calm”.

“The only time he raised his voice was when the police came,” Stacy said.

When police arrived at the mobile home park, they first went to aid the stabbing victim, but the older boy wanted the officers to pick him up and yelled, “‘Hello, I’m right here. You’re going the wrong way,'” Stacy said.

Tiffany Armijo said her son was playing with Michael before he was attacked and that she had never seen the 12-year-old before.

“He was playing with Michael and his brother, and my kid, too,” she said, her voice breaking.

She declined to discuss any details about the attack, but said Michael was her son’s best friend and “a good kid”.

“They always played together. He was at my house almost every day,” she said.

Poelman said the boy lived with his parents and two siblings in the mobile home park. A man who identified himself as Michael’s grandfather when the AP called a phone number listed for his home declined to comment.

Police said the 12-year-old boy was evaluated at a hospital after the attack, then taken to the Kent County Juvenile Detention Center.

Defence attorney Charles Boekeloo said he entered a not-guilty plea for the boy during Tuesday’s hearing, adding that he may seek a mental evaluation to determine if the boy is competent to stand trial.

The boy is designated as an adult in the juvenile court system, which would allow the boy, if convicted, to be sentenced as a juvenile and then as an adult once he turns 21, according to Chris Becker, chief assistant prosecutor for Kent County.

A preliminary hearing is scheduled for August 13.