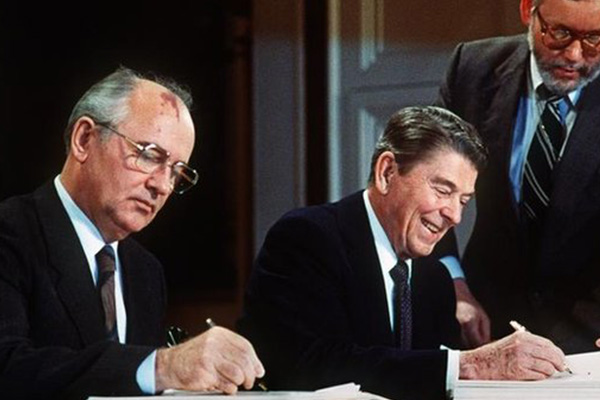 (BBC) — Russia has been accused by the US of breaching a key arms control treaty banning medium-range nuclear missiles.

According to reports in the New York Times, citing US officials, Russia has been conducting flight tests since 2008 of a ground-launched cruise missile.

Such a test would fall under the treaty’s parameters.

The US has not publicly stated that Moscow is in breach of the treaty but it has now briefed its Nato allies on the issue.

Washington is also reported to have raised concerns with the Russians several times during the past year but has been told that there is no issue to be resolved.

A Nato official contacted by the BBC responded to the reports by noting that “compliance with arms control treaties is a serious matter”.

The Intermediate-Range Nuclear Forces (INF) Treaty, the official said, was “a key component of Euro-Atlantic security, and compliance with arms control treaties is fundamental to building mutual trust and confidence, as is increased transparency in our dialogue with Russia”.

The 1987 INF Treaty was one of the key arms control agreements of the Cold War years.

It eliminated an entire category of nuclear-armed weapons; land-based cruise and ballistic missiles with ranges of between 500km and 5,500km (310 miles and 3,400 miles).

This encompassed US Pershing and Cruise missiles based in Europe, along with the then Soviet Union’s SS-20 systems.

Some experts believe that the cruise missile in question is the R-500; derived from the land-based Iskander-K.

Douglas Barrie, aerospace analyst at the International Institute of Strategic Studies in London, said that “if the weapon is nuclear-capable, then its range is likely to drive a large coach and horses through the INF Treaty’s restrictions”.

He added: “There’s no doubt that the Russians can package a nuclear warhead in a weapon of this diameter, as they’ve done it before.”

However, he noted that “open source reporting has so far associated this system generally with a conventional non-nuclear payload”.

There have been persistent reports that the Russians are in some way breaching the terms of the INF Treaty.

Up to now these have focused on the testing of intercontinental ballistic missiles at much shorter ranges that would fall within those covered by the INF Treaty.

Arms control experts have tended to dismiss these allegations.

This latest controversy, though, relates to a different sort of missile; a cruise type weapon.

The Russians are no great fans of the INF agreement which they believe – some 26 years after it was signed – reflected a very different world.

It only eliminated these weapons from the US and Soviet/Russian arsenals and, since then, several countries have developed missiles within this range.

The issue is a sensitive one diplomatically, with the US struggling to try to craft a better relationship with Moscow.

The so-called “re-set” in ties between the US and Russia has come and gone.

They can work together on issues like Syria and Iran, although with very different perspectives and goals.

Further progress on arms control looks unlikely but the last thing the US wants to do now is to call the Russians out publicly for cheating.

However, there are also domestic US political aspects to this row.

More conservative elements in Congress have been pushing on the issue of Russian non-compliance with the INF Treaty, seeking to introduce legislation to compel the administration to report on Moscow’s behaviour.

One of the great arms control successes of the Cold War era is fast becoming an irritant in relations between Washington and Moscow.