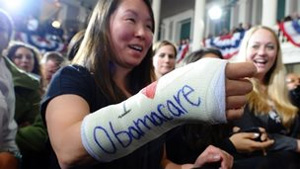 (BBC) The Obama administration has said barely 27,000 Americans enrolled for health insurance through its troubled federal website in the first month.

About 106,000 people were insured in total, most of them through the state-run websites.

The administration originally estimated nearly half a million people would sign up in the first month.

Democrats reportedly expressed frustration about the botched rollout in a White House meeting on Wednesday.

The federal website, used in 36 US states, has been bedeviled by glitches since its 1 October launch.

The administration has pledged that the portal will be “running smoothly” for a “vast majority” of users by the end of November.