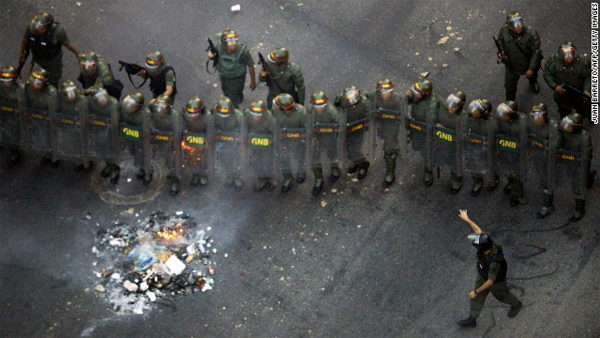 Two people were killed in the capital of Caracas during the protests Wednesday, Venezuelan attorney general Luisa Ortega said.

Mayor Ramon Muchacho of Chacao, a municipality in greater Caracas, confirmed a third fatality on his Twitter account.

Pro-government students countered the protests by taking to the streets of the capital Wednesday. Their marches were part of “Youth Day” commemoration, which marks students’ participation in the 19th-century independence fight against colonial powers.

Venezuelan President Nicolas Maduro described the recent protests as a possible coup against his government.

“I want to alert the world we are facing developing coup plan against the democracy and the government that I preside by the responsibility of a small group of irresponsible leaders, violent, full of hatred and personal ambitions,” he said Wednesday.

“We condemn violence! Violence will never be the way! We know the vast majority rejects and condemns it,” he said in a message posted on Twitter.

Students have protested for days nationwide to demand a better way of life, greater security on campus and the release of colleagues arrested during marches.