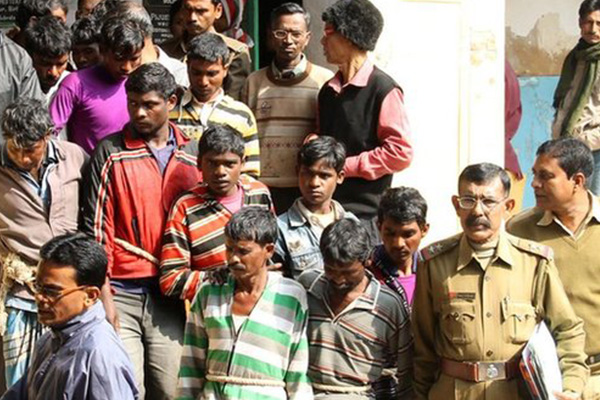 (BBC) — Police in India’s West Bengal state have arrested 13 men in connection with a gang rape of a woman, allegedly on orders of village elders who objected to her relationship with a man.

The 20-year-old woman has been admitted to a hospital in a critical condition.

Scrutiny of sexual violence in India has grown since the 2012 gang rape and murder of a student on a Delhi bus.

The suspects were produced in court and have been remanded in custody. They have not yet made any public comment.

Police said the latest incident on Monday night was prompted by the relationship between a woman belonging to the Santhal tribal group and a non-tribal man from a nearby village in Birbhum district.

Clan-based village councils made up of local elders wield great influence over life in large swathes of rural India and often mete out punishments for offences deemed to contravene local traditions and mores.

“The relationship was going on for almost five years. When the man visited the woman’s home on Monday with the proposal of marriage, villagers spotted him and organised a kangaroo court. During the ‘proceedings’, the couple were made to sit with hands tied,” Birbhum police chief C Sudhakar told the BBC.

The man paid up, but the woman’s family were unable to pay, police said.

The headman, who is a distant relative of the woman, then allegedly ordered the rape, Mr Sudhakar said.

“Her family could not pay, so go enjoy the girl and have fun,” the headman reportedly told villagers, according to a complaint filed by the woman’s family.

The 13 men arrested in connection with the incident include the headman.

Although the attack took place on Monday night, the family of the woman gathered courage to go to the police on Wednesday afternoon. The woman was admitted to a hospital only on Wednesday night.

She is currently being cared for by a five-member medical team in hospital, local officials say.

The incident has led to outrage in India with some describing it as “inhuman and completely outrageous” and many calling for a quick trial and punishment for the rapists.

“In a democratic country, based upon the rule of law, no vigilantism can be permitted,” India’s Information Minister Manish Tewari said.

“The West Bengal police must thoroughly investigate the alleged gang rape… and bring to justice those responsible. Authorities must also ensure that the woman and her family receive immediate and adequate police protection,” Amnesty International’s Divya Iyer said.

Correspondents say rape is a common occurrence in India with many cases still going unreported, despite the heightened media attention in recent months.

Although India has tightened its anti-rape laws and society is more openly discussing cases of violence against women, women across India still live with the daily fear of sexual assault and victims still often have to deal with police apathy.

In 2010, village elders in Birbhum ordered at least three tribal women to strip and walk naked in front of large crowds in West Bengal, police say.

The women were being punished for “having close relations” with men from other communities.