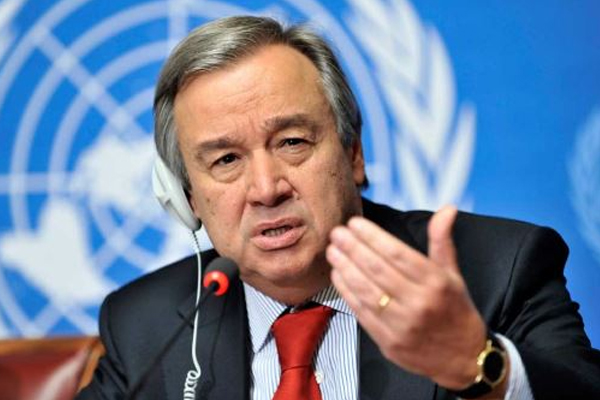 Ankara, Turkey (AFP) — The world is losing its ability to prevent conflicts and the lack of “effective leadership” has led to the worst displacement situation since World War II, the UN refugee chief warned Tuesday.

Antonio Guterres, the UN High Commissioner for Refugees, said in Ankara that the twin crises in Iraq and Syria had created a serious displacement situation and the world showed no effective leadership to address the challenges.

“The Syria and Iraq mega-crises, the multiplication of new crises and the old crises that seem never to die have created the worst displacement situation in the world since World War II,” Guterres said in an address to the annual meeting of Turkey’s ambassadors stationed abroad.

Over the last year, more than 13 million people have been displaced by the conflicts in Syria and Iraq, he said.

Meanwhile, the crisis deepened in South Sudan spreading across the border into Chad while the situation aggravated in Libya and a new crisis emerged in Ukraine, he added.

“What this shows is that the international community has largely lost its capacity to prevent conflicts and solve conflicts,” said Guterres.

“This is a world where conflicts multiply and the old ones are not solved and the result is, of course, a dramatic impact from the humanitarian point of view.”

Guterres said in June that the number of people driven from their homes by conflict and crisis has now topped 50 million for the first time since World War II.

Turkey, a vocal critic of the regime in Damascus, is home to 1.7 million Syrian refugees –- some of them are settled in camps near the border but many more are scattered throughout the country.