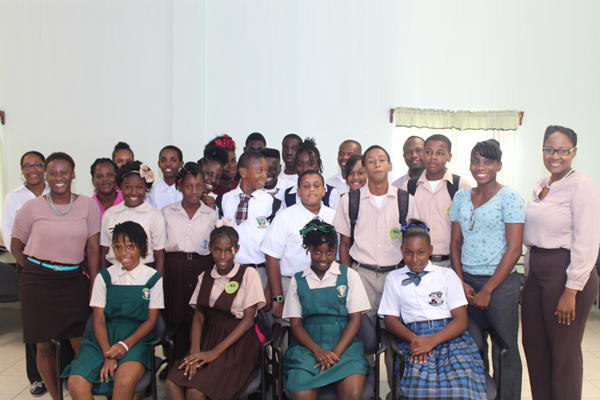 The October 31 workshop targeted all public high schools in both St. Kitts and Nevis. The Basseterre High, Charles E Mills Secondary, Saddlers Secondary, Verchilds High and Gingerland Secondary Schools were all in attendance.

The objective of the seminar was prevention for the early use, future misuse and abuse of drugs and alcohol. The students were accompanied by a Guidance Counsellor from their respective schools, who will then follow-up with the students during the school year.

Topics for the seminar proceedings included, “Coping Strategies” which was delivered by Counsellor within the Ministry of Homeland Security Carolyn Brownbill. There was also a presentation entitled “There is Greatness within you” that encouraged the youths to identify their importance. This was delivered by Inspirational speaker, James Browne, while Officer Lauston Percival gave a presentation on Drugs and Alcohol.

The afternoon sessions divided the students into groups who were given case studies that pushed them to incorporate what they learnt from the morning sessions. These case studies gave possible scenarios of children being influenced to use drugs. The Guidance Counsellors lead the group sessions after which the groups presented their case studies in the form of a skit.

“Their presentations were rich and showed that they paid attention to the morning sessions and were able to incorporate the necessary coping strategies and approach to resisting the use of drugs and alcohol,” said Karimu Byron, Director of the National Council on Drug Abuse Prevention.

Ms. Byron led the wrap up sessions where she encouraged the attentive youths to not only incorporate the lessons into their daily lives but to reach out to at least one of their peers to do the same.

Memorabilia were given to each youth and the Guidance Counsellors. Each participant received two pens etched with reminders to “Rise Above.” They were then asked to keep one pen for themselves and to give the additional pen to a peer who they will empower to rise above the influence of drugs and alcohol.

The Honourable Patrice Nisbett, Minister of Homeland Security with responsibility for the National Council on Drug Abuse Prevention, encouraged the youths to rise above the negative influence of drugs, alcohol and other harmful behaviour.

Minister Nisbett also commended the Guidance Counsellors for their sacrifices and commitment to ensuring the well being of the future leaders.

The National Council on Drug Abuse Prevention Director expressed that she is grateful to the Christian Council for their generous contribution. Ms. Byron also extended appreciation to Diane Dunrod-Francis, a member of the Drug Council and Supervisor at Youth Empowerment Department as well as Tricia Esdaile, Senior Education Officer in the Ministry of Education. A special thank you also went out to the facilitators “who did an extraordinary job in bringing the message across and to all the Guidance Counsellors who were cooperative in the activities.”

Ms. Byron also thanked all the schools who participated in the inaugural event and expressed that she looks forward to a bigger and better Youth: Rise Above Seminar in 2013.