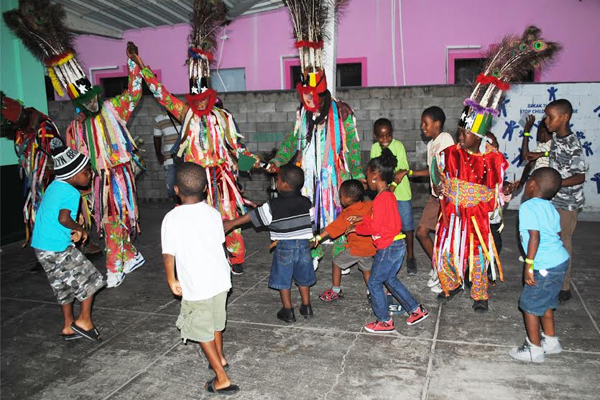 Basseterre, St. Kitts — Serving her constituents guided by the mantra ‘Stronger Families and Safer Communities’, Federal Parliamentary Representative for Basseterre Central (No 2) the Hon Marcella Liburd is reporting that the constituency which she has represented since 2010 is moving in the right direction.

“2014 has been a challenging year, but it has also been a very productive year,” said Hon Liburd, who is also the Federal Minister of Health, Community and Social Development, Culture and Gender Affairs, on being interviewed at Dorset Park on Saturday December 20 where she had hosted a Constituency Christmas party for children.

She said that she continues to preach the message of ‘Stronger Families and Safer Communities’ as it guides a lot of the plans and programmes that they have, including the three children’s parties that were simultaneously held at the Irish Town Primary School, Dorset Park, and at Pine Garden where they joined with Constituency Three.

“We do this every year for Christmas, to have a party for our children so they can enjoy themselves,” observed Minister Liburd. “It also fits into our whole family theme that we all want to promote and highlight and also to build community spirit.”

Dorset Park represented part of what was achieved in the productive year that was 2014, as the park had undergone a major renovation. The reopening ceremony was held on August 30 where a number of local residents who would have contributed to the holistic idea of family and community development were honoured by having various areas named after them.

The party held on Saturday at Dorset Park was the first party to be held in the renovated park, and according to Hon Liburd, that added a bit of sparkle to the Dorset Park party as they had all the equipment for the children to use, in addition to the court.

“So all in all we brought families together,” reported Hon Liburd. “We got children together for them to play and to socialise with each other. We recently (Wednesday December 17) had the opening of the New Road Family Park. Probably next Christmas we can have something up at that park where children would have wider space and more equipment to play.

“The parties were very well attended and when we look at the fact that we had some rain, I thought they all went down very well. But again, we have these things every year and some people are accustomed to us having these parties and they generally look forward to them.”

Central Basseterre has through the course of the year seen the start of the building of homes at Pine Garden under the Habitat Independence 30 Housing Programme initiative. Ground breaking was done on May 6 and the 62 units on offer are now pretty much to completion.

The constituency also saw the completion of some of the family homes that are built in different parts of the community, and according to the Hon Liburd, that was very important for the constituency.

“On the front of the Community Development Department we saw men being introduced to a pilot programme aimed at bringing families together and to help them support one another,” said Minister Liburd.

“This again is a programme that speaks to families, and recently (Saturday December 13) the men were taken to the movies by the Department to see a family movie and also rewards were given to those families who were totally compliant because they have certain rules that they follow in terms of bringing families together.”

According to the Federal Minister, the programme also included budgeting and all the other things that they have learnt and others that they will continue to be taught for the persons to have family values instilled. The Minister believes that if they continue to do that, it would add to the development of the country’s infrastructure because they cannot have one without the other.

“So building infrastructure is one thing but also building people’s character is something that you need to do that would help in maintenance, and all the other things we need so we do not have a lot of graffiti on the walls as people try to destroy property,” advised Hon Liburd.

“A more disciplined society is what we are really moving towards and I think the programmes and the plans that we have started really would bring that end result at the end of the day, where we are beginning to see small measures of success in this area.”