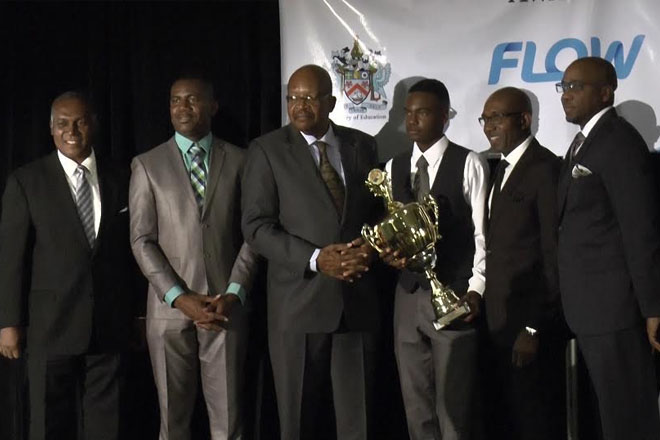 (ZIZ News)
Teachers and students came in for high praise on Thursday night as the Chamber of Industry and Commerce hosted the 29th Annual Academic Excellency Recognition Awards Ceremony.

Family members, friends and other supporters gathered, at the Marriott Resort, with teachers and students for that event which recognised the fruits of hard work.

According to organisers, the objectives of the ceremony are to promote the principle of excellence among high school students and higher standards of teaching by recognising selected teachers.

President of the Chamber of Industry and Commerce, Damion Hobson said the event does more than reward those who performed well; it can inspire others to do the same.

“This is the event which motivates hundreds of students to strive for excellence, the event that encourages teachers to perform at their best as they toil assiduously to encourage and motivate students. It is the event where the hearts of parents, family members and friends can swell with pride as they appreciate the success of the students gathered here this evening,” he said.

Minister of Education, the Hon. Shawn Richards commended the attendees on their quest for excellence and stated that this is the path that everyone must follow.

“Too many Kittitians and Nevisians have accepted mediocrity as the norm, as the best we can do. I am glad therefore that tonight’s exercise debunks the myth that we must settle for less than excellence because that does not suffice,” he said.

Meanwhile, Business Support Officer at FLOW, Karen Blackett said her company is pleased to spotlight the positive achievements of youth.

She said “in an era when there is much talk about youth who are choosing the wrong path it is encouraging when we have functions such as this to honour the youths of our Federation who are doing well.”

She said she was proud to be associated with an organisation like FLOW who, for the past 29 years have partnered with the Chamber of Industry and Commerce and the Ministry of Education to recognise the youth of the Federation who have excelled academically.

The awards ceremony recognised the achievement of students who performed well in the 2015 CXC Examinations.

Special recognition was also given to the State Scholar, Christian Bryden, the runners-up and teachers who excelled in their duties over the past year.