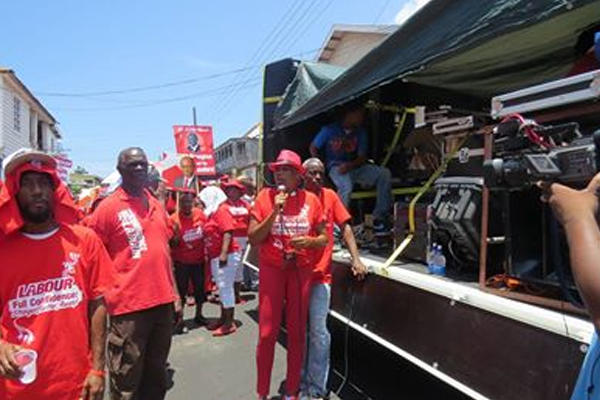 Action likened to the KKK laying wreath on MLK grave

Basseterre, St. Kitts (CUOPM) — St. Kitts and Nevis’ Prime Minister the Right Hon. Dr. Denzil L. Douglas agrees with his lone female Cabinet Minister the Hon. Marcella Liburd that it was totally disrespectful that detractors of the Labour Movement would place wreaths on the graves of fallen Labour leaders.

Dr. Douglas was at the time reacting to a statement by Miss Liburd during Monday’s Labour Day March in Basseterre, who likened it to members of the Ku Klux Klan laying a wreath on the grave site of the late Civil Rights Leader, Dr. Martin Luther King.

“And Marcella told you as we moved along this route today, how much they disrespected them, the names that they called them, but today in mockery and in disdain they did it yesterday (Sunday) to go to their graves and place orange and white unto their graves, desecrating their graves,” said Prime Minister Douglas.

“And as Marcella said, it is almost synonymous with the Ku Klux Klan in America, going to the graves of people like Martin Luther King,” said Dr. Douglas.