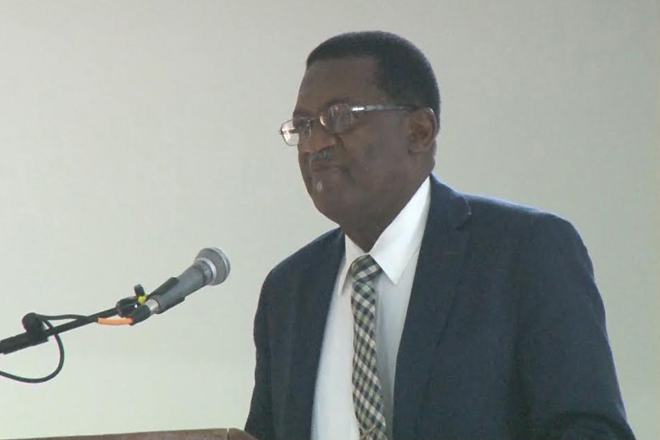 Agriculture Minister Says More Work To Be Done In Agri-Sector

(ZIZ News) — Minister of Agriculture the Honourable Eugene Hamilton says there is a lot of work to be done in agriculture to reduce threats posed by drought and other climate related hazards.

While speaking at the Department of Agriculture’s 21st Review and Planning Meeting Minister Hamilton reflected on the significant impact the drought had on the Federation last year.

“It was only two or three years ago that we were blessed with rainfall of about 79 or so inches but by 2015 the rainfall experience had gone down to 27.6 inches, that’s 66% loss in rainfall and of course even though I may sound repetitive having said it already, the projection for 2016 and 2017 by the experts seem very dim. So that the farmers that suffered tremendously last year as a result of lack of water may have a very difficult time again this year,” he said.

Minister Hamilton further explained that the ministry took steps to solve this problem but there is still much to be done.

“We have tried to mitigate that over time. We have built twelve dams with the support of our allied partners from the Agriculture Resource Management Project. It is true however, that of the twelve dams that have been built, six of them are now damaged. That means we have a lot of work to do,” he said.

He said the aim of the ministry is to make sure that the resources that were offered by the ministry are being used.