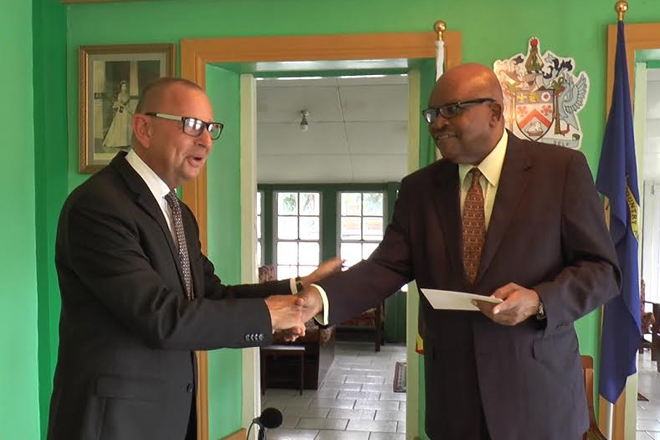 Ambassador Bijl gave best wishes on behalf of the King of the Netherland’s Kingdom.

“I present to you my letters of credence as well as the letters of withdrawal of my predecessor,” he said. “On behalf of his majesty the King of the Netherlands kingdom, I will kindly ask you to accept his personal best wishes to Her Majesty the Queen of the United Kingdom and the Commonwealth as well as His Majesty’s good wishes for the country and the people of St. Kitts and Nevis and yourself, His Excellency”, Ambassador Bijl said.

Ambassador Bijl also said, he anticipates greater cohesion between the Federation and the Kingdom of the Netherlands.

“I personally believe that there is room for more intensified co-operation amongst all the Caribbean states including our Kingdom. Climate Change, Disaster Risk Reduction, Safety, Employment and Wealth for all our people may inspire us to go that extra mile” he added.

Governor General, Sir Tapley Seaton was also graced by a visit from Ambassador- Designate of the Unites States, Her Excellency Linda Swartz Taglialatela.

Sir Tapley, Ambassador Bijl and Ambassador Taglialatela spoke of expanding cultural and economic relations with all CARICOM states and plans of mutual benefit amongst the various nations.

Ambassador Bijl will be stationed at the Embassy of the Kingdom of the Netherlands in Trinidad and Tobago.