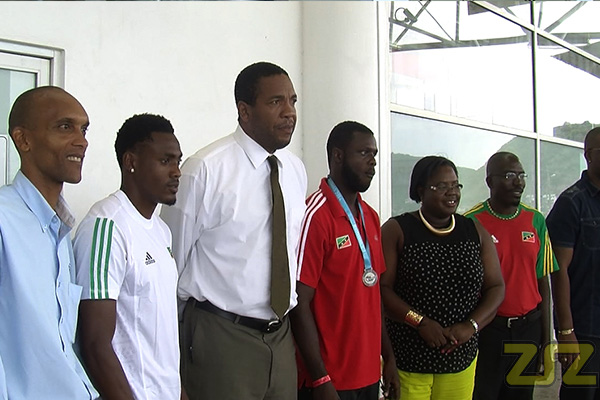 ZIZ News — Two of the five athletes that represented St. Kitts and Nevis at the inaugural World Relays meet in the Bahamas over the weekend returned home on Monday.

Two athletes, Jason Rogers and Allistar Clarke, were met at the airport upon their arrival home by the Minister of Sports and members of the St. Kitts and Nevis Amateur Athletic Association [SKNAAA].

Clarke, who anchored the silver medal relay team, spoke of the feeling after finishing second.

“I was the only person on the team who was emotionless, speechless. I was on the ground for a while because it didn’t hit me yet but after a while I joint my teammates and celebrated and the feeling was that we really accomplished something good. I think the time was one of the top five times ever run in that distance ever in the history.”

Junior Minister responsible for Sports on Nevis, Hon. Hazel Brandy-Williams said these athletes have again helped to put our small federation on the map.

“What this has done for us is to further put St. Kitts and Nevis as a small nation further on the map. They have done incredibly well and we are certainly happy for their accomplishments. I am hoping that in their ensuing games St. Kitts and Nevis will continue to perform and shine the light for everybody to see,” the Minister said.

SKNAAA President, Glenville Jeffers noted that track and field in the federation is heading in the right direction.

He said, “We have taken it up a notch year after year so we might be heading to the gold medal podium. Track and field in St. Kitts you know we are really on high. We have set up a programme since 2010 and we have been building up and up year after year. Our coaches, we continue to train them and they continue to deliver good athletes.”

Meanwhile, the Minister of Sports, Hon. Glenn Phillip said this recent accomplishment is testament to the investment his government continues to make in track and field.

“I am very elated by the performances of the guys but more importantly is that it has shown the government’s investment into athletics has now come to fruition. For example, we have just recently as last year refurbished and placed a new track here in St. Kitts and Nevis for athletes to train.”

St. Kitts and Nevis’ time of 1:20.51 is also the third fastest time ever in this event.