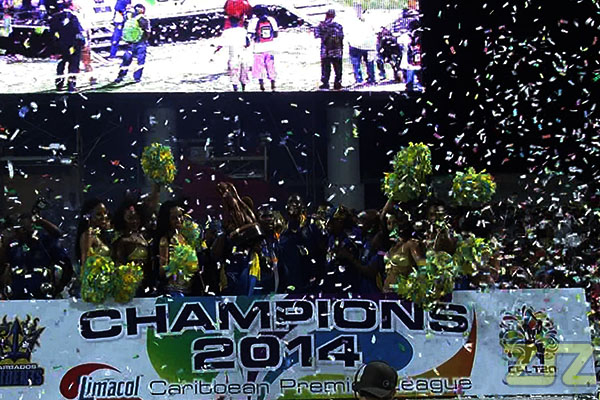 It was a festive atmosphere at the Warner Park Cricket Stadium on Saturday as a sold out crowd watched the final of the 2014 edition of the Limacol Caribbean Premier League.

Thousands of fans, decked in their official CPL gear and brandishing the flags of the team they supported turned out to support the Barbados Tridents and the Guyana Amazon Warriors. The majority of the patrons present were clearly behind the Amazon Warriors.

In the end however, the Tridents won the match by eight runs under the Duckworth/Lewis Method following the rain affected final match.

Batting first, the Tridents scored 152 runs from their 20 overs. Dwayne Smith with 59 runs and man of the match, Shaoib Malik, on 55 not out top scored for the team.

The Warriors response was interrupted by rain on multiple occasions and, after a short interval during the 15th over, the decision was made to end the game.

Captain of the Barbados Tridents, Kieron Pollard said despite an ending that no one predicted, the team is ecstatic about their winning the competition.

“As I spoke to Bish I told him it feels well, it feels ecstatic,” he said. “I’m happy for the guys. It’s an opportunity for the guys to go to Champions League and show case their talents. I think we have gone through a rough time and we in the dressing room, the management, staff, would’ve known in this tournament, in terms of the different hiccups. But we were able to rally the guys and tell them that all that matters is the cricket. And at the end of the day there’s no more motivating factor than the championship and going to Champions League. I think the guys actually rallied around each and every one of us. It was a total team in the dressing room there and the guys were very up for it. So I’m very happy and very happy for the guys.”

Team coach, Robin Singh said Saturday’s win was testament to the type of cricket the team played throughout the tournament and particularly in St. Kitts.

“Most of the guys realized that the only way to win is to play good cricket and I think the bowling did a fantastic job,” he said. “Even though we were struggling at times with the batting we managed to put 160…170 on the board. And I think there was a lot of false confidence given by opposition when you play on these sorts of tracks. If you have a good bowling attack I think 170 is always a good score. And in the finals, any score is a good score. And we’ve seen what the pressure can do here. Most of the teams really can’t chase under pressure and that’s one of the reasons why opted to bat first in all of the games. I guess many people thought we were mad but I think we knew what we were doing.”

“You know we have just won so I’m gonna take in that atmosphere and see what contractual obligations I have and then make a decision. But as we said, Champions League,” he said.

The Amazon Warriors’ Lindell Simmons was named the Player of the Tournament and will receive a parcel of land at Beaumont Park worth more than US$400,000.

Simmons ended the tournament with the most runs scored at 446, ahead of Barbados’ Malik who finished with 406 runs.