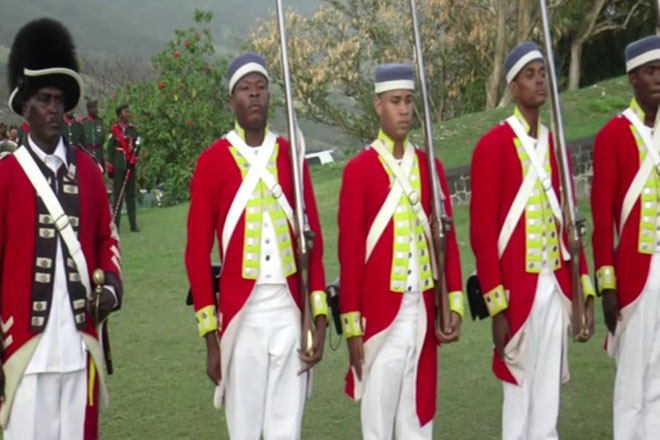 (ZIZ News) – Activities to mark the Brimstone Hill Society’s 50th anniversary continued on Sunday with a Human Chain and Beating the Retreat Ceremony.

Beating the Retreat is a military ceremony which dates back to 16th century England which was first used to recall nearby patrolling units to their camps.

Members of the St. Kitts and Nevis Defence Force and the Cadet Corps took part in the event.

The ceremony began with the inspection of the guard by Governor General, His Excellency Sir Edmund Lawrence, and featured performances by local young artists.

President of the Brimstone Hill Fortress National Park Society, Sir Probyn Innis spoke of the significance of the society reaching its 50th anniversary.

He said, “Fifty years represents a very special landmark and we want to draw attention to the longevity of this society, not only because of its many achievements despite overcoming many obstacles but because so often we tend to tell ourselves that things don’t last.”

Principal of the Basseterre High School, Carlene Henry-Morton noted that as a World Heritage Site, Brimstone Hill is key to tapping into a growing market of niche tourism.

“Crest 2014 and Peak and Skit 2014 contend that cultural and heritage tourists spend substantially more than traditional tourists do. And this form of travel is growing in popularity throughout the world especially among the high end visitor. Bearing these benefits in mind, the sustainable development and management of our heritage sites must be a national priority,” Mrs. Henry-Morton stated.

Prime Minister, the Hon. Dr. Timothy Harris said his government recognizes the value of Brimstone Hill as a World Heritage Site and pledged assistance to help preserve it.

He said, “Maintaining this status as a World Heritage Site of exceptional value which deserves the protection of all humanity will not be easy. And I know in some other parts of the world, World Heritage Sites are in danger of losing their recognition. My government will give the necessary support to the society to ensure that that never happens here.”

The anniversary ceremony ended with the firing of cannon, a march past and final salute to the Governor General.

Activities to mark the Brimstone Hill Society’s 50th anniversary run throughout 2015 and have so far included an open day, awards banquet and a public lecture.