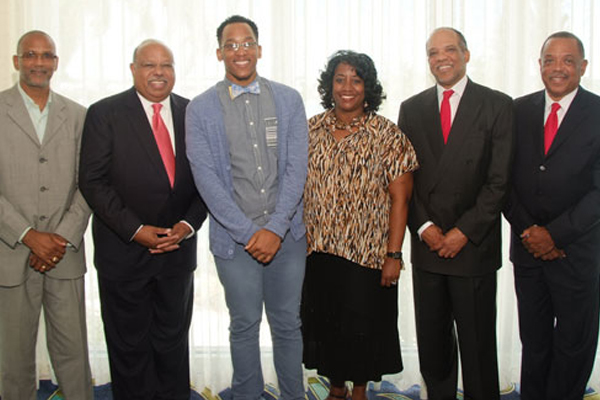 Basseterre, St. Kitts (CUOPM) – A Bermuda student at Windsor University School of Medicine here in St. Kitts is one of two awardees of the Bermuda Health Foundation.

According to Bernews, she is Jacqueline Simons, who was recognized at the recent 12th Annual Salute to Service Award Luncheon and scholarship presentation.

Ms. Simons, along with Issac James, were presented with scholarships this year in the amount of $7,500.00 each.

Ms. Simons is currently studying at the Windsor University School of Medicine in Basseterre, St. Kitts.

Prior to enrolling at Windsor, Jacqueline was employed at King Edward VII Memorial Hospital as the Senior Technologist for the Department of Anatomic Pathology where she managed a team of highly skilled technologists, assessed quality assurance measures and provided the technical oversight for difficulty diagnostic calls. While on summer break, she continues to work at King Edward.

Ms. Simons and her former team members were recognized by the Bermuda Hospitals Board some months ago for introducing a new, state-of-the-art system that uses digital imaging and provides more accurate results for cervical cancer screening.

She said that although she loved her job as Senior Technologist, she knew she wanted more. “I realized that I was capable of making a further contribution to Bermuda Hospitals Board and I had not reached my full potential, hence my decision to become a physician.

Mr. James is a graduate of Bermuda College with Distinction with Associates of Science Degree. He began his studies at the University of Leeds and is enrolled in the Medical Science Degree Programme. Isaac is intending to eventually qualify in Pediatric Medicine which will combine his love of working with children and his interest medicine.

During the past several summers, Isaac has worked with children at a local summer day camp to help with his tuition fees. In addition to his love for children, Isaac also has a love and respect for the elderly, hence when not working with children, he volunteers at Lefroy House. He has been volunteering at Lefroy House for the past ten years performing such tasks as arts and crafts and playing board games with the residents.