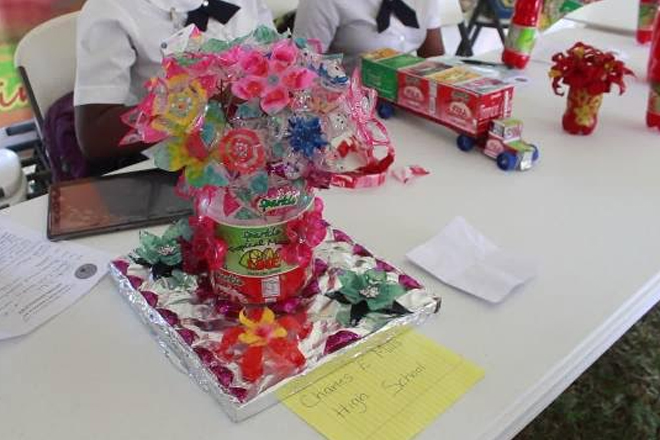 Bottling Company – Unlocking the Creativity in Me

(ZIZ News) – The Sparkle Art Competition gave students from schools across the federation to showcase their talents on Friday.

The Second Annual “Unlocking the Creativity in Me” Sparkle Art Competition hosted by the St. Kitts Bottling Company, has, according to Minister of Education Hon. Shawn Richards, displayed a level of partnership, while allowing students of the federation to showcase their work.

“The Ministry Of Education is undoubtedly very pleased to be associated with this particular competition being held by the St. Kitts Bottling Company,” he said. “Within our schools we have children who have different abilities. Some of our children are artistically inclined and the bottling company is giving an opportunity for those children to come to this our Independence Square and publicly display their artistic skills.”

Minister of Education on Nevis Hon. Vance Amory thanked the students for their interest and participation in the competition, stating, “All of you are winners because to get your minds wrapped around how you can utilize waste materials to produce the beautiful artefacts you’ve done takes quite a bit of imagination and creativity and hard work band time. So thank you for doing that for us. Thank you for doing it for your country and for yourself.”

The Bottling Company’s General Manager, Keithley Phillip said for his company, the art competition serves a two-fold function, the first being the fact it brings out the latent talent that is inherent within the Federation’s youths and it provides for them an avenue to give vent and to display this talent.

The second function he says is that it gives the Bottling Company the opportunity to give back to the country as the gifts given to the winners were worth approximately 10 thousand dollars.

The other schools participating in the competition were St. James, Dieppe Bay, Newton Ground and St. Thomas Primary Schools and Cayon High School.