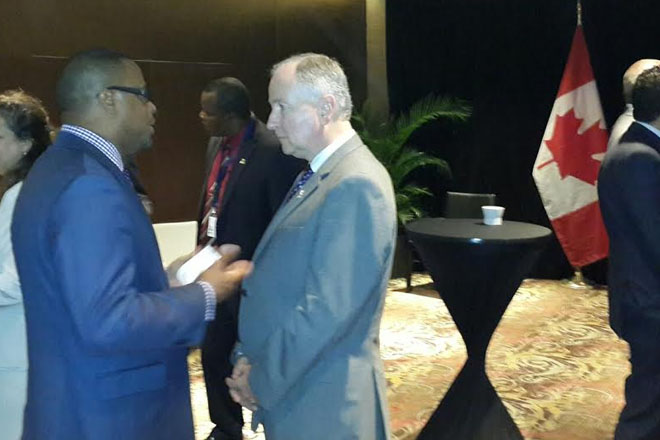 Among those he spoke with was the Canadian Foreign Affairs Minister, Rob Nicholson.

Minsters Brantley and Nicholson discussed the issue of the visa requirement imposed on citizens of St. Kitts and Nevis by the Canadian Government in November 2014.

Mr. Nicholson said his government is open to holding detailed talks with the Government of St. Kitts and Nevis on the reinstatement of visa-free travel for the Federation’s citizens.

Minister Brantley also outlined the Federation’s intention to open a full High Commission in Ottawa in the first half of 2015. Brantley described the move as a formal indication of the commitment of St. Kitts and Nevis to its long and valued relationship with the people and Government of Canada.

The IOM is an intergovernmental organization dedicated to promoting humane and orderly migration for the benefit of all. It does so by providing services and advice to governments and migrants.

Mr. Brantley expressed to Ambassador Swing that St. Kitts and Nevis would possibly be interested in becoming a member of the organisation. Both men agreed that further discussions will be held on this possibility later this year.