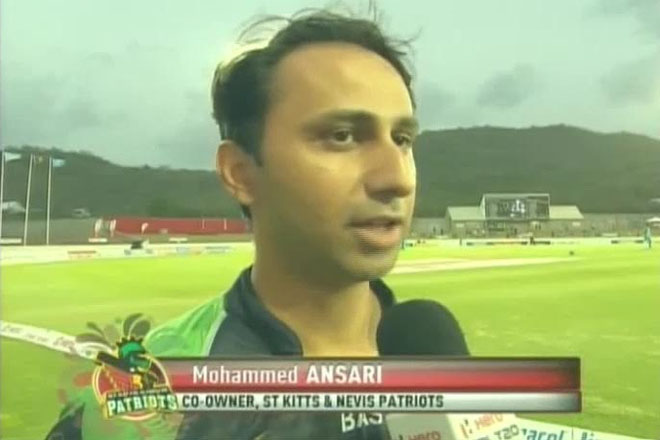 (ZIZ News) — Despite a rocky start to the 2015 Hero Caribbean Premier League (CPL) for the St. Kitts and Nevis Patriots, one of the team’s owners says he is still excited they were able to bring a franchise to the Federation.

Patriots’ Co-Owner, Mohammed Ansari commended the Government and people of St. Kitts and Nevis for supporting their endeavour.

He said, “It’s been really amazing. I think as a lifelong cricket fan, me and my partners, we found an opportunity to get involved in cricket in the West Indies and it was just an amazing opportunity and one that we just couldn’t pass up. So we are just very, very fortunate to have the support of the St. Kitts Government and the people there and we were able to bring a team to St. Kitts.”

He also explained the reason for choosing St. Kitts and Nevis and not another Caribbean country.

“We have a business in St. Kitts and we’ve been there for five or six years and the island has been great to us and cricket is very much a fabric of the place so we found an opportunity to really get involved. We’ve got the island involved. We put together a little league on the island as well so it’s just been fantastic,” he explained.

The team lost its first match to the St. Lucia Zouks on Wednesday however, Ansari said they remain confident in the squad.

“We have a lot of faith in our squad. We were fortunate to get the first pick in the draft and we are very happy with the squad we’ve put up and as far as St. Kitts is concerned, we are really looking forward to a good ten days there,” he noted.

From Tuesday June 30th, the Hero Caribbean Premier League will shift to St. Kitts’ Warner Park for a 10-game stand, with the home team taking on the Jamaica Tallawahs in the first match.