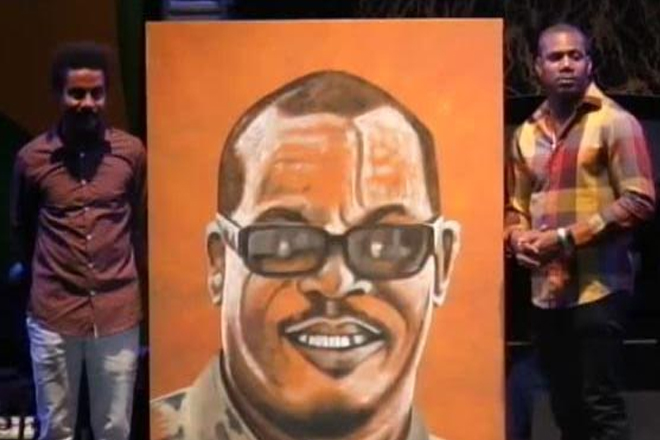 At the halfway point of the show, Carnival Chairman Noah Mills and Deputy Prime Minister, the Hon. Shawn Richards took center stage to unveil a painting of the late calypsonian and MC.

“Earlier this year, we lost an icon, we lost a stalwart and a calypsonian, an entertainer and a professional who no doubt it’s going to be very, very difficult to fill his shoes,” Mills said.

“In discussions earlier with the Deputy Prime Minister and Minister of Culture, we were trying to conceptualise a way in which we can immortalise him and I’m speaking about of course Calypso Reggie. And we thought about it and there’s another hero I would say; he’s still living; in the likes of Vaughn Anslyn. He hails from Nevis and we contacted him and asked him to immortalise him by painting something,” he continued.

Minister Richards said Calypso Reggie’s contribution to calypso and culture on a whole cannot be over stated. He noted that the painting will remain at the office of the Carnival Committee until a more permanent home can be located.

“I know that we can all agree that had Reggie been alive, Reggie would more than likely been on the stage here this evening, whether it was hosting this evening’s show or performing,” the Minister said, adding that “The name Calypso Reggie became synonymous with that of Carnival. Reggie entertained us, not just throughout Carnival activities, but he would have partaken in different community festivals throughout St. Kitts and Nevis. It is therefore only fitting that we pay tribute to Calypso Reggie.”