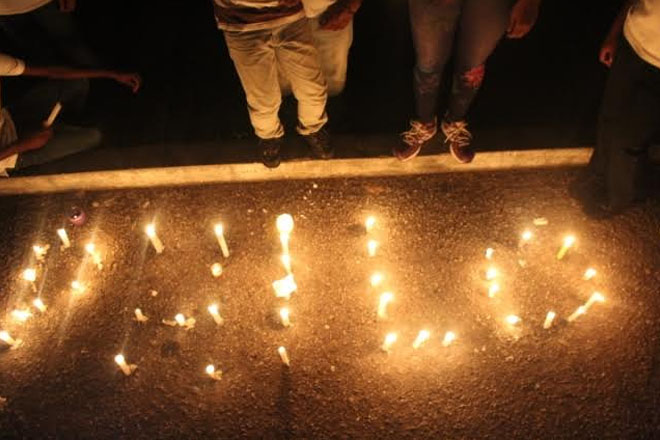 (ZIZ News) – On Saturday, scores of Nevisians participated in a candle light vigil for 17-year-old Philo Wallace who was fatally shot two Saturdays ago.

The vigil began at 6:30pm when family members, cricketers, friends and other concerned Nevisians gathered at Enrique’s Bar in Cedar Trees where Wallace was shot. It continued when they walked to the Elquemedo T. Willett Park.

While there, cricketers used lighted candles to spell “Philo” as their tribute to the young player.

Among the speakers at that event was Hamilton resident Lawford Forbes, who was the uncle-in-law of the deceased.

He said, “You’re going to fret yourself and do evil then somebody is going to do evil, then evil is going to continue but sometimes evil has to stop somewhere,” as he cautioned attendees about taking the law into their own hands.

Forbes was not alone in that call as Parliamentary Representative for Charlestown, Hon. E. Robelto Hector was among the attendees.

He stated, “It’s an unfortunate situation. I too would want to appeal to members of the community to allow the investigation to go through and to be calm at this time. Justice is not for us but justice is for the system.”

Hector added that it is important to show support and stand in solidarity with the family of the deceased.

Meantime, Former President of the Nevis Cricket Association Ronald Powell, while speaking of Wallace’s love for the sport, described him as a champion.

“I know it’s a tough time for all of us and especially those who have played with and against our young champion who has passed. It’s very good to see so many of you showing your support tonight because we understand the nature of the incident. A young man has lost his life and we are so sad,” he said as he shared fond memories of the deceased.

“I want to say, as Past President of the Nevis Cricket Association, I have known him for eternity. I’ve known him for his entire life. He was the same age as my son Ross. They have been in school, Charlestown Primary School, and they have moved on to Charlestown Secondary School. They have played all their lives together,” Powell recalled.

Wallace is expected to be laid to rest this week.