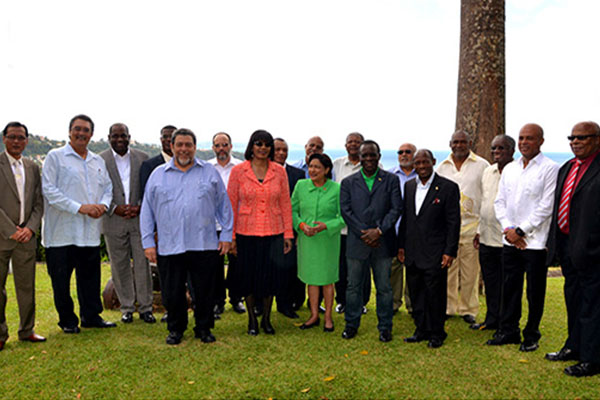 “They expressed appreciation for his leadership in advancing the Human Resource Development (HRD) agenda at this meeting and recalled his similar role in the area of health, particularly in addressing HIV/AIDS through PANCAP, NCDs and with the establishment of CARPHA.  They also expressed appreciation to the Prime Minister for his commitment and dedication to the Community as the longest serving member of the Conference,” said the CARICOM Community in its communiqué following the end of the 25th Inter-Sessional in St. Vincent and the Grenadines.

According to the communiqué, Heads of Government, in keeping with a decision made at their Thirty–Fourth Regular Meeting in July 2013, discussed the issue of Education and Human Resource Development in CARICOM.

They received a presentation introduced by Prime Minister Douglas, which highlighted the need to focus on Human Resource Development across all ages and within all sectors, including the public sector and gave specific focus to the formal education system.

“They considered the current state of education in the Region and acknowledged the significant gains which had been made over the past decades.  They nevertheless lamented the inherent inefficiencies and wastage in education and training systems,” said the statement.

It also pointed out that Heads of Government noted the less than optimum outcomes for students at all levels, matched against the requirements of 21st century societies and economies. They endorsed the need for a holistic approach to transformation of education which would make more efficient use of national and regional resources, including Information and Communication Technologies (ICTs), to develop and implement solutions to the challenges outlined.

Heads of Government also recognised the lack of capacity in the Region to deal effectively with students with special needs, and identified this as an area for focused attention.  They noted the importance of research and teacher training, the sharing of best practices and technical and professional resources.

The Commission is expected to collaborate with Education Ministries and other portfolios, with key civil society actors, in particular labour and the private sector, on perspectives and key proposed actions with regard to the Strategy.