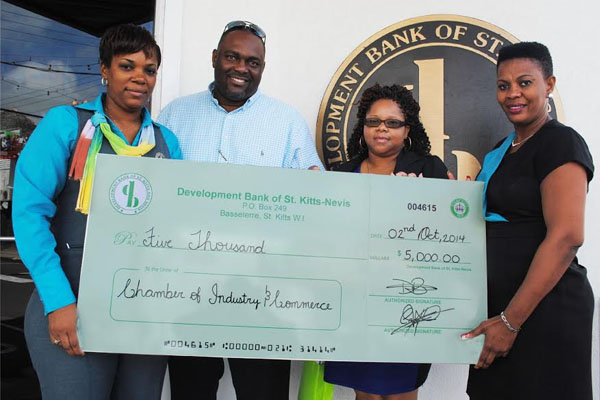 Basseterre, St. Kitts (October 16, 2014) — The Development Bank of St. Kitts and Nevis, which continues to support the Manufacturing Awareness Week celebrated by the Chamber of Industry and Commerce, sees itself as an integral player in the development of the Federation.

“Our thrust is the social economic development of St. Kitts and Nevis,” said Mr Carlton Pogson, Development Bank’s Acting General Manager,following the presentation of a sponsorship cheque for this year’s Manufacturing Awareness Week that was observed in the period Friday October 3 to Saturday October 11.

“Because we are an integral player, over the years we have and continue to partner with the Manufacturing Division of the Chamber of Industry and Commerce in their celebrations because we are about the development of our nation,” observed Mr Pogson. “Wherever we can lend a helping hand to see that our nation develops, we are always ready to make ourselves available as a bank.”

The Development Bank of St. Kitts and Nevis, according to Mr Pogson, plays a critical role in the growth of the industrial estates at the CA Paul Southwell Industrial Site, Bird Rock, and Sandy Point as it is the Government’s agent for all the factory shells which were built by the bank.

Mr Pogson added that almost all of those who rent the shells are part of the Chamber of Industry and Commerce, specifically the Manufacturing Division.

“In addition to the factory shells we also lease lands,” said the Acting General Manager. “Most of the lands there are Crown lands belonging to the Government and we are government’s agents responsible for maintaining and leasing these lots for the purpose of economic development so that individuals can have them to use.”

The sponsorship cheque was presented by Ms Jasmine Primus, Support Officer in Business Support Unit that has oversight over the Industrial Estates, and Mrs Vernitha Maynard, Support Officer in the Marketing Department, and was received by Mr Gerhon Joseph who is Chairman of the Manufacturing Awareness Week Committee 2014.

“The Manufacturing Council is one of the largest groups under the umbrella of the Chamber of Industry and Commerce, and every two years we have a Manufacturing Awareness Week, basically to bring awareness to the importance of manufacturing to the economy of St. Kitts and Nevis,” said Mr Joseph, who was accompanied by Ms Amanda Williams, Chamber’s Projects Officer.

Ms Williams, who gave thanks on behalf of the Chamber of Industry and Commerce, said that they were grateful to the Development Bank for its contribution through its gold sponsorship towards the hosting of this year’s Manufacturing Awareness Week.

Mr Joseph explained that manufacturing is divided in three well defined sectors. The first one is the Enclave Sector, the plants that produce purely for export; then the Indigenous Sector, the plants that produce products for the local market as well as export; and the Cottage Industries which are basically home-based producing purely for the local market.

This sector, he observed, contributesto over seven percent of the GDP on an annual basis, adding that even when the economy was on the downside it consistently maintained that 7-8 percent to GDP. The sector employs over 2,500 people in the manufacturing division.

He pointed out that the Development Bank of St. Kitts and Nevis has kept the sector going, and speaking of a number of persons whose businesses have thrived because their association with the bank, he said: “I myself is one of those in the Indigenous Sector and I know for a fact that Development Bank has been more than help to us.

He said that while he was not speaking for the entire council, “I know there are some plans in the making for us to approach the Development Bank on some new concepts and ideas.”