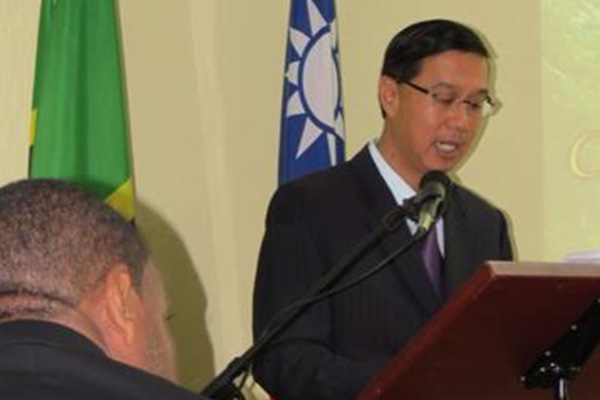 Basseterre, St. Kitts (CUOPM) – A Chinese New Year gift for the 21 million people of the Republic of China (Taiwan) is how, Resident Ambassador of the Asian nation to St. Kitts and Nevis, His Excellency Miguel Tsao, described Wednesday’s unveiling of a set of commemorative postage stamps celebrating the 30-year relationship between both countries.

“During the past two weeks, the media in Taiwan published a lot of news about the stamps and caught the attention of the Taiwanese people and also stamp collectors around the world. They have written to the Embassy and the Post office to request the above-mentioned stamp collection as a priceless treasure. So I would like to share my happiness with you that the repercussion of the stamp issuing is tremendous.

“Indeed the eight (8) stamps mean a lot for our two countries. It is like a footprint of our joint and concerted endeavours. It also symbolizes our close and inextricable relations between our two countries. It’s a looking glass to guide us to move forward to the other thirty years and beyond in our relationship,” said Ambassador Tsao to the invited guests who included Governor General, His Excellency Sir Edmund Lawrence; Acting Prime Minister, the Hon. Dr. Earl Asim Martin; Minister of Posts, the Hon. Glen Phillip; Postmaster General, Ms. Sandra Davoren and Deputy Postmaster General of Nevis, Mrs. Rhonda Williams.

“We (in Taiwan) are bidding farewell to the year of snake and greeting 2014 – the year of the horse according to our Chinese zodiac. I would like to say Happy New Year from St. Kitts and Nevis to the twenty-one (21) million people in Taiwan and also to all Kittitians, Nevisians and good friends here,” said Ambassador Tsao, who used the opportunity to extend special thanks to Minister Phillip for his “far-sighted initiative and fulfillment of this idea” and to Postmaster General Davoren and Deputy, Darrien Viera for their “dedicated and seamless coordination with the Embassy during the past two months, to make today’s ceremony happen.”