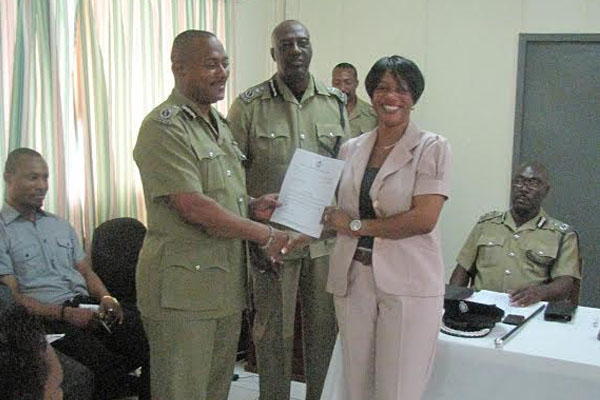 (ZIZ) Tuesday 17th December 2013, Commissioner CG Walwyn held an Awards and Lecture Presentation at the Police Training Complex. During the awards ceremony there were a total of thirty six (36) junior ranks who received an award. The ceremony started with the introduction to Commissioner Walwyn`s family who were also present. Then Chairperson/Master of Ceremony was Inspector Lyndon David ask the audience to stand as they sung the National Anthem, which was followed by the prayer which was lead by the Force Chaplin, Pastor Leroy Benjamin.

In his address, Commissioner Walwyn welcomed everyone to the gathering, and commended all the officer who have worked hard and all the supervisors who made sure this was done. He reminded the gathering that this is the Christmas Season, and encouraged everyone to do everything they can to show hospitality to their family members and visitors who are coming to the Federation, and wished everyone Merry Christmas, and a safe Carnival Season.

Commissioner Walwyn during his address thanked Inspector Smithen and the men of the Criminal Investigation Department (CID) for their hard work this year. He informed the gathering that they have reduced the amount of burglaries and increase the number of convictions of stolen properties, and because Inspector Smithen and his hard work there has been a decrease in the number of burglaries in certain areas in communities.

Commissioner Walwyn took the opportunity to thank the Prime Minister, Dr. Denzil L. Douglas and Ms. Astona Browne of Anti Crime Unit for their support and assistance given to the Royal St. Christopher and Nevis Police Force in its fight against crime. He stressed that the Special Service Unit (SSU) is one of the most qualified units in the police force right at this time, and most of it was because of the Anti Crime Unit, and especially Ambassador Astona Browne.

Pastor Leroy Benjamin, Force Chaplin in his remark encouraged members of the Force to be happy for each other and make 2014 a special year for the force. He also wished everyone peace and goodwill during the Christmas and Carnival Season and for the new year.

Assistant Commissioner Robert Liburd on Nevis gave and update on crime on Nevis and informed the gathering that there has been a reduction in crime. He also stated that there are sixteen (16) officers from Nevis on the list for awards which is indicative of their hard work. He therefore assured Commissioner Walwyn of his commitment to the continued push of the force’s initiative, and hard work of the officers under his command.

Assistant Commissioner Ian Queeley gave an enlightening experience when he related to an occasion when he was the only person being invited to meetings with Dr. Halliday, and when he questioned why was he the only one present, he was told “the only reward for hard work is more work”. He then encouraged supervisors to manage their human resources carefully.

Commissioner Walwyn therefore take the opportunity to encouraged members of the public to visit the force’s website at www.sknpolice.com. for safety tips. He also asked persons to refrain from carrying more cash than they need at Christmas and Carnival Season and to use the ATM in the day rather than night if they have any ATM transactions.

Commissioner Walwyn also asked members of the public visit the Force’s facebook page to get information about the Press Releases and other information related to the force located at www.facebook.com/RoyalStChristopherAndNevisPoliceForce. He therefore, encourage everyone take crime seriously and partner with the police, and to call Crime Stoppers at 1-800-8477 (TIPS), which is located in Canada; callers remain anonymous.

Commissioner Walwyn also wants the public to know that Crime stoppers has been effectively working in Federation better than any other Caribbean Islands. He therefore ensures the general public that The Royal Christopher and Nevis Police Force will continue to place in their efforts and support to the community in helping to reduce crime. But, advised that the community will need to partner with the police to give assistance all the way.