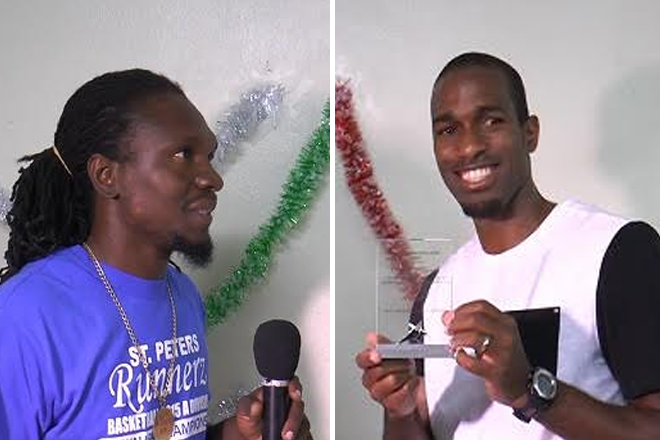 Community Says Thanks To Atiba Harris

(ZIZ News) — On Saturday, the sporting community in St. Peter’s came together to say thanks to a national player, for his contribution to sports and the community on a whole.

It started out as a presentation ceremony where national footballer Atiba Harris was scheduled to make a donation to the St. Peter’s Runners Basketball Team.

But what he didn’t know was that the organisers had plans of their own.

Friends, relatives, and players surprised Harris with a party for his 31st birthday as their way of saying thanks for the contributions he had made to the community and sports in general.

Coach of the St. Peter’s Runners, Valentine France, praised Harris on his accomplishments.

“Atiba, you made history by becoming the first MLS football player for St. Kits and we are very proud to call you our own. Today, we’d like to present you with a plaque. A token of appreciation from the club,” he said.

He said “Atiba hasn’t gotten where he is now from laying back and sitting back and relaxing. And I want him to be a motivator for the younger sportsmen in St. Peter’s.”

He encouraged the young players to study and emulate Harris to achieve similar success.

Harris thanked his family and supporters for their encouragement and passed on some words of wisdom for up and coming athletes.

“Whatever you want to be in life you can, and…just to show that a little boy from Monkey Hill was able to make it to the professional level, Europe and MLS, I think any one of you guys here, whether male or female, should go after your dream. Just chase it. Don’t let anybody stop you. Anything is possible with God. Anything is possible, he said.

Harris then presented a set of jerseys to the St. Peter’s Runners for their upcoming games.

But that wasn’t the end of the surprises. Coach France announced that for the upcoming season the team would be named the Atiba Harris St. Peter’s Runners Basketball Team.