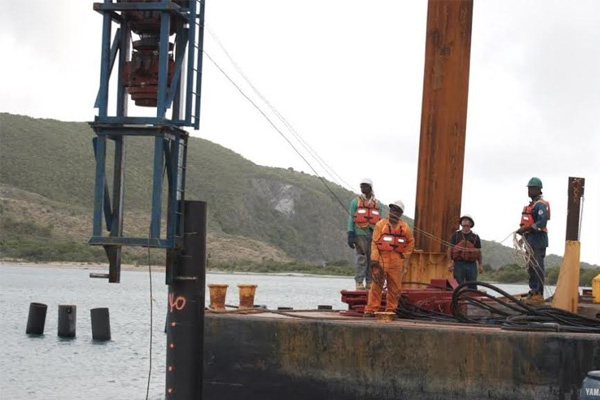 Basseterre, St. Kitts (SKNIS): Local and international stakeholders are excited after the official groundbreaking ceremony at Christophe Harbour on Friday (June 20), where the first pile was driven into the new superyacht marina.

CEO of the Christopher Harbour Development Company, Buddy Darby said that the development will be a major step-up in the local Tourism industry and is as a result of the support of a number of stakeholders.

“The execution of a project of this nature requires the collaboration and support of many institutions and individuals,” he stated. Your on-going commitment is integral to our success and I thank you for your continued partnership.”

Minister of Tourism and International Trade, Hon Richard Skerritt, noting that the yachting industry was identified as a significant feature in future tourism plans, said that the marina will affect locals as well as guests of the island.

“What we’re trying to do is facilitate the development of a world class and sustainable yachting sector, which contributes to improving the quality of life for the local community, while providing a memorable experience for all of our visitors,” said Skerritt.

Minister Skerritt lauded the support from “enthusiastic” public and private officials from the Ministry of Tourism and International Transport, The National Coast Guard, The Customs and Excise Department, Immigration, the Department of Marine Resources, Air and Sea Ports Authority, Tourism Authority, Urban Development Corporation and Department of Physical Planning.