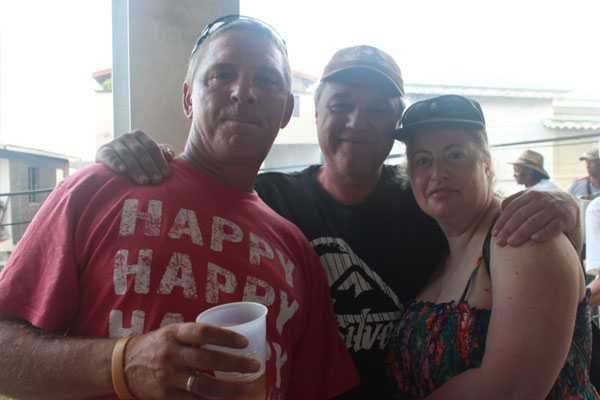 Basseterre, St. Kitts (SKNIS) — Millions of international viewers who watched the most recent six matches of the Limacol Caribbean Premier League (CPL) T20 tournament got a glimpse of the heritage and culture of St. Kitts and Nevis, but on Saturday (August 09) they also heard about the success story of the twin-island Federation.

Prime Minister the Right Honourable Dr. Denzil Douglas was interviewed by CPL commentator Michael Haysman during the broadcast of the Hawksbills-Amazon Warriors game. He was congratulated for serving four terms in office and was asked about the CPL and how it fits into Government’s agenda. Prime Minister Douglas highlighted the tremendous opportunities for tourism that can be gained and added that direct flights by carriers such as American Airlines and British Airways make travel access easier. The Prime Minister said the CPL was a very important showcase tool for St. Kitts and Nevis as it highlights the country’s development to viewers around the world.

Arnold and Denise from Pretoria, South Africa are getting a firsthand view of the games and the development. They are visiting the island for two weeks and while admittedly they are not avid cricket fans there was an attraction to attend the matches on Sunday.

“It’s nice; it’s lively,” Arnold said, citing the shortened format as a personal preference. “The music, the atmosphere, it’s been very nice.” Denise agreed and the couple’s friend Darren, who has lived here for the past 11 years, said she has been enjoying herself immensely. “She’s been dancing in the stands,” he revealed. “She’s never danced Kittitian music in her life. We have to teach her to wuk up,” he joked, referring to the colloquial term for gyrating the hips.

“I like the island and I will tell people to come,” Arnold emphasized while his wife said she was impressed with the infrastructural development. “It’s much more developed than I thought, it is really nice,” she concluded.

Mark, a chef at Montpelier Plantation Inn in Nevis and his friend Peter also attended the games on Sunday. Mark also commented on the transformation of the country.

“What I’ve seen is a lot of the roads being built, a lot of construction, people are getting good jobs …” he stated. “I think (the government) is doing a good job considering the situation in the global economic climate. You are doing well.”

The two gentlemen are from England and live in Nevis. Mark for 16 years while Peter and his wife migrated seven years ago. They were among scores of people who travelled to St. Kitts via boat to enjoy the CPL.

“The grounds and the facility are great. It looks good and it is a very special place to visit well done to St. Kitts and Nevis,” Mark stressed. He reflected on similar venues in England and said Warner Park “is just as equally good but there is a lot more atmosphere and a lot of fun here and that’s what we like.”