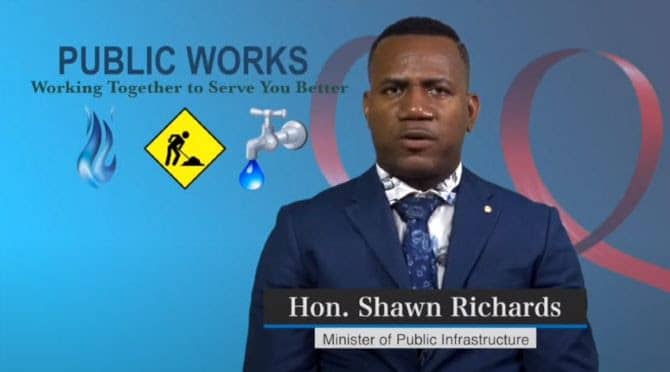 On May 26, 2021
Basseterre, St. Kitts, May 26, 2021 (SKNIS): Minister of Public Infrastructure, Deputy Prime Minister, the Honourable Shawn Richards, says that phase two of the Traffic Light Project, as well as the paving of the Old Road Bay road, is expected to be completed by the end of the month.

During his official address to commemorate Public Works Week 2021, Deputy Prime Minister Richards said that the rehabilitation of Old Road Bay road which is being carried out by local contractor Rock and Dirt involves many separate projects accumulating to $31.8 million.

He added that it entails, “Reclaiming of land on the seaside, raising the level of the new parcel of land, so far, all of this has been completed, paving of the road with concrete and then asphalt. The asphalt paving is currently in progress, lighting of the road, the addition of guard rails will be placed on both sides of the road, road marking and traffic signs will be installed, and rock armour protection on the seaside.”

He also stated that “The Ministry of Public Infrastructure, Post and Urban Development is continuing with the Phase 2 Installation of Traffic Signals throughout St. Kitts. The Public Works Department has identified seven areas and the new traffic lights have been installed.

Phase two of the Traffic Lights Project is expected to be completed by May 31, 2021, the honourable minister said.

He also spoke about the ongoing projects over which the Public Works Department has supervision.

This year’s Public Works Week 2021 (May 22-28) is being held under the theme “Working Together to Serve You Better.”