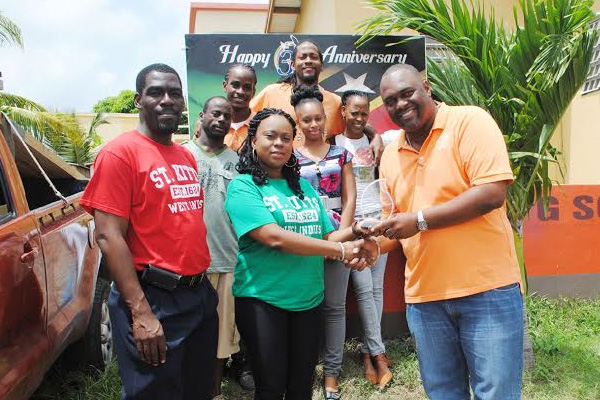 In recognising that it is its clientele that has contributed to this marked and noticeable progress, the Development Bank has recognised two youthful entrepreneurs who in partnership with the Bank have contributed to the forward movement of the Nation’s agriculture sector, and service industry respectively.

“As we celebrate 31 years of independence and as our nation moves forward, with partnerships like these between the Bank and micro businesses, we see that both the Bank and the economy have a future as we move into the next years and beyond,” commented Acting General Manager Mr Carlton Pogson.

Mr Pogson made the remarks on Friday September 12, when a plaque of recognition was presented to the Founder and CEO of G Squared Arts Mr Gerhon Joseph at College Housing in Basseterre. With him was the Bank’s Manager for Human Resources, Marketing and Product Development Ms Danienne Brin.

“On behalf of the Development Bank of St. Kitts and Nevis, we are happy to be associated with such businesses,” said Mr Pogson. “Over the years we have done a lot of micro financing, helping with micro to small medium size businesses and G Squared Arts is a testament of the Bank’s ability to support the development of our economy.”

Earlier, on Wednesday September 10, Ms Danienne Brin had travelled to Nevis where accompanied by the Manager of the Nevis branch, Ms Hyacinth Pemberton, she presented a plaque of recognition to Ms Latoya Lowe, the Manager of Nevis Egg Farm at Spring Hill.

According to Ms Brin, the recognition award for contribution to agriculture presented to Ms Lowe, and for contribution to service industry presented to Mr Joseph were part of the Development Bank’s celebration of the Federation’s 31 anniversary of independence which is being observed under the theme ‘A Nation of the Move, Celebrating our Progress’.

“We are all aware that St. Kitts and Nevis is celebrating the 31st anniversary of its independence, so we just wanted to give tribute to some businesses in St. Kitts and Nevis that have contributed to the Federation’s progress,” said Ms Brin in Nevis.

“We are going to present a plaque to Nevis Eggs Farm just to show that we recognise the contribution that they have made in the Federation and more specifically in Nevis in the area of agriculture and food security as a whole.”

According to Ms Hyacinth Pemberton, Manager of the Nevis Branch of the Development Bank of St. Kitts and Nevis, Nevis Egg Farm was started by Mr Oliver Tyson and his wife Norma Tyson in 1991 by way of loan funds and technical assistance from the Bank.

“The farm started out as an egg producing enterprise but after recognising the need for supplying other products to the Nevisian market, they expanded operations to include raising and production of chicken broilers, turkeys, pork and mutton,” observed Ms Pemberton.

“In 1998 when Hurricane Georges struck the Federation of St. Kitts and Nevis, the farm was 90% destroyed and the Bank was again instrumental in assisting the clients to re-establish the farm.”

“Our relations began with Ms Latoya Lowe in 2013 when she decided to take over the operations because the business was meeting some challenges,” noted Ms Pemberton. “The Bank was again instrumental in helping the business to recuperate. Ms Lowe has been doing a splendid job at managing the operations.”

Ms Lowe said that as the manager at Nevis Egg Farm she ensures that all accounts are up to date and that clients have been given the best service. Now that the farm is back on its feet, she plans to reintroduce the rearing of broilers and goats which did very well under Mr Tyson.

She is aware that Mr Tyson had a good working relationship with the Development Bank and has therefore followed in his footsteps, by servicing the loans advanced and has recently acquired two additional loans to buy chicken feed, and to buy chickens.

“I was treated quite well when I went to the Bank and I truly say that it is a bank that lends a helping hand,” commented Ms Lowe. “I would like to say thanks for recognising us and thanks for all the help they have given us over the years. There is no looking back.”

Mr Gerhon Joseph, founder and CEO of G Squared Arts, exudes confidence and the one mantra that has guided him is the word ‘progress’, and as the Federation of St. Kitts and Nevis is celebrating the progress it has made since its independence 31 years ago, he attributes his success to the Development Bank of St. Kitts and Nevis.

The company which was started in 2001 as a party promotion company has become a major player in the marketing and advertising industry not only in the Federation of St. Kitts and Nevis, but in the entire Leeward Islands. It now has a total of 11 employees.

“We do everything from business cards to concepts for promotion, signage, billboards, banners, you name it,” explained Mr Joseph. “Businesses call us and say I need a sale next week, and if we could conceptualise it and give it an image and if we could actually promote it as well.”

His relationship with the Development Bank of St. Kitts and Nevis has been a learning experience because it has helped to guide him during the growth of the company. He singles out Mr Shavon Douglas, the Bank’s Business Support Manager who gave him a lot of technical advice.

He says that everything the company owns, including the building and equipment were all financed by the Development Bank. He recalls that at one time he even had an overdraft facility with the Bank and Mr Douglas would direct him on when to, or when not to use the funds.

“Basically we would not have been here without Development Bank,” said Mr Joseph. “Development Bank is a young people bank. I encourage similar age people who are doing their own business to go to Development Bank as well. I am very impressed with the service and the level of commitment they have towards small businesses.”

Upon receiving the Development Bank recognition award plaque from Marketing Manager, Ms Brin, he simply told her: “Thanks.” Turning to the Acting General Manager, he said: “Mr Pogson, we need to buy another piece of equipment so we going come by you soon.”